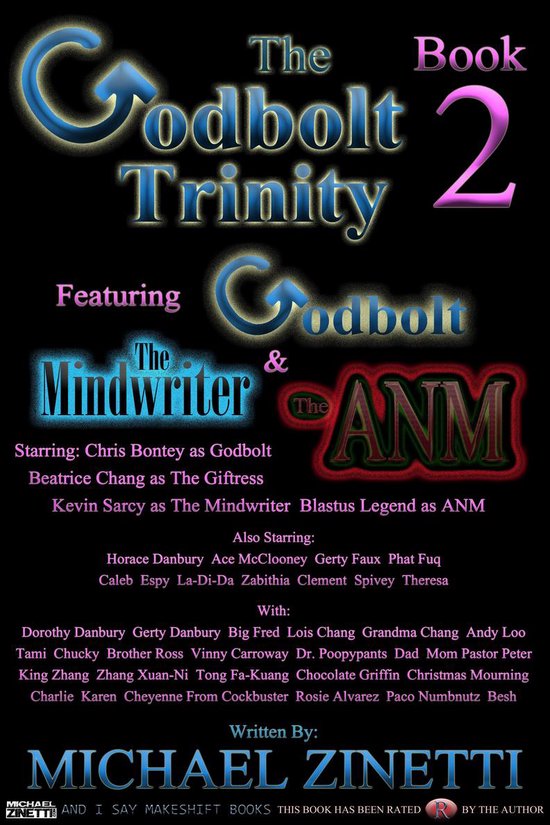 This is the second book in The Godbolt Trinity Series and shows the further development of Chris Bontey as Godbolt with help of his teacher, Beatrice Chang AKA The Giftress. The other secondary main characters, Kevin Sarcy as The Mindwriter, and Blastus Legend as the Anti-Nigger Machine, now known as The Legendary Blaster, also develop, as their alliances and subsequent goals evolve.


Chris Bontey or Godbolt is a 23-year-old Chinese food delivery driver and lackluster college student who misses his medication and as a result seems to develop super powers. This second book, Bontey has found his teacher, and now must learn to concentrate and cultivate his powers without doing anything to offend his young teacher.

Unbeknownst to Bontey, there is a secret government organization, aptly and simply titled, The Organization led by an extremely determined man named Horace Danbury. The purpose of the Organization is unclear, but seems to be to find mutants and either get them to join the Organization or terminate them.

The book begins with the Organization having captured Blastus Legend or The Anti-Nigger Machine, and now trying to get him to join them. Danbury hopes to use Blastus Legend as a powerful ally to help recruit Godbolt, but first needs him to take care of a small mess The Mindwriter made in the first book.

The book is written in first person from the three main characters' points of view, with Godbolt taking the lion's share of the book, followed by The Mindwriter, and lastly the ANM.

Kevin Sarcy or The Mindwriter is an ambition mind reader and writer with immense powers and promise, who, apart from ambition, has a very sadistic and egotistical streak. He is a downright bastard. In the second book, The Mindwriter hopes to increase his powers and become a Crossing Guard, one who can cross over to dimensions at will. He has also developed a few love interests, with one in particular his pinnacle love interest.

Blastus Legend or The Anti-Nigger Machine, named after the Public Enemy song of the same title, is an ex-college basketball star who injured his knee and thus ending his hopes of NBA stardom. To make matters worse, Legend loses his scholarship and is forced to leave school. These events leave Legend a deeply bitter man. He sees much of his fate as a result of his color. He is extremely depressed and moves to the inner-city and becomes a drug dealer and pimp. However, when he develops special powers, Legend's life takes a completely different turn. In the second book, Legend must decide if he wants to join the Organization, as the Angel Lizabeth has requested him to do, so that he might fulfill his ''calling''. A calling ANM has no knowledge of.