The Governance of Ethnic Communities Political Structures and Processes in Canada 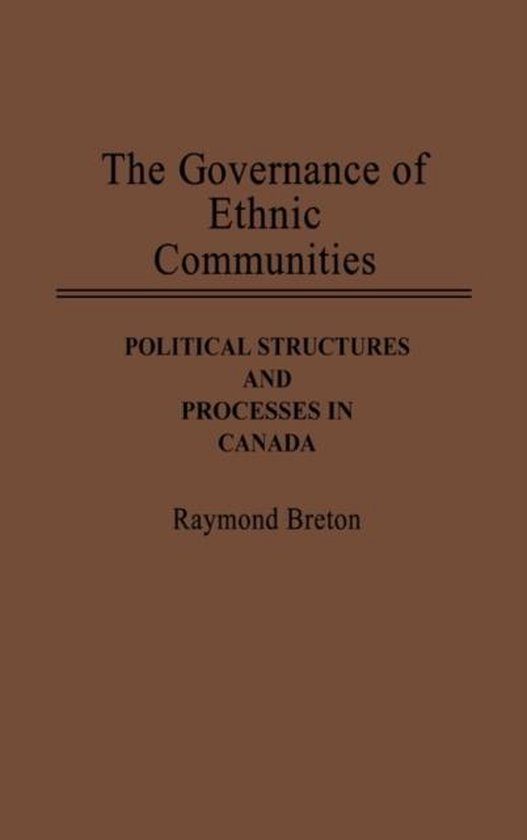 Greenwood Press's Contributions in Ethnic Studies series focuses on the interactions and outcomes, both positive and negative, of people from different cultures and their often dissimilar expectations and goals. In The Governance of Ethnic Communities, Raymond Breton examines Chinese, German, Italian, Spanish, Portuguese, Ukrainian, and West Indian communities in Canada, with occasional references to the native peoples and other ethnic communities in that country and in the United States. These groups' respectively unique cultural and historical matrices, coupled with their status in the dominant social structure, furnish provocative and diverse data and serve as the bases for scholarly generalizations. From a previously rather underdeveloped perspective, Breton looks at the ethnic community as a stateless political entity with political structures and political processes for self-governance, arguing that although these groups have no state institutions, they do have public ones. He also highlights the processes of collective decision-making, how participation and resources are mobilized for collective projects, the relationship between elites and members, conflict management, and the exercise of power in managing community affairs. The relevant community affairs are both internal matters, such as cultural events, educational and religious activities, or aid to new immigrants, and external affairs, such as immigration legislation and its implementation, civil rights, and relations with the country of origin. The volume's eight chapters explore the origin and structures of governance; examine some of the processes of governance, including community leadership and the formulation of collective goals; and inquire into the construction and maintenance of the sociopolitical community through an investigation of individual participation in community affairs and of the group's collective identity. Throughout this analysis, Breton considers the impact of environmental forces and of internal political competition. With its orientation toward significant variables and principles, this important study represents an excellent summary of current research on ethnic communities in North America and will contribute greatly to the present understanding as well as future investigations of such groups. It will be of compelling interest to historians, sociologists, political scientists, psychologists, and psychiatrists, among others.
Toon meer Toon minder