The Grave Concerns of Jennifer Lloyd 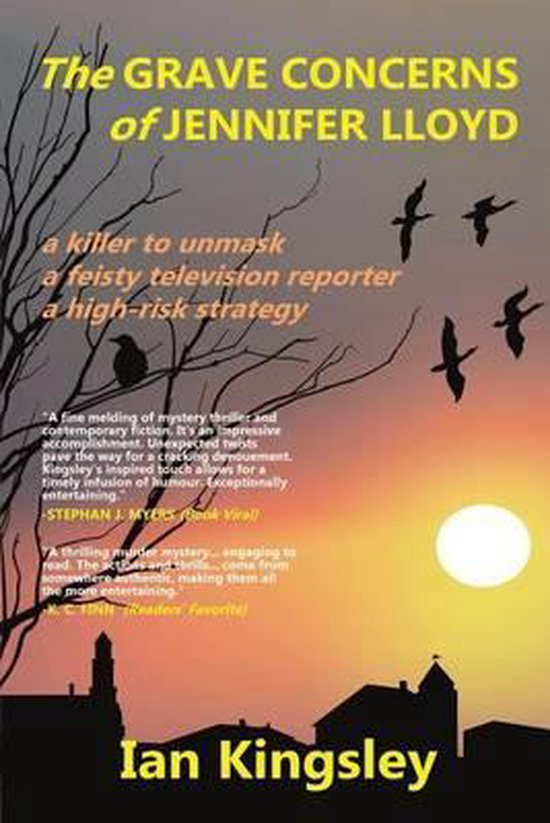 Few fictional characters come over as strongly as feisty TV presenter, Jennifer Lloyd - on a mission to make a name for herself. Three years earlier, Digby Barrington-Smith's wife suspiciously drowned in the lake of his prestigious Dorset house and gardens attraction in the UK, a member of staff went missing, and a pet dog died. Although initially suspicious of Digby, the police eventually accepted his wife's death was accidental. But there were just too many coincidences for Jen to accept. So she plans to worm her way into his confidence, surreptitiously find out what happened, and dramatically expose a killer during the climax of a documentary about the gardens. Jen is an emotionally scarred 25 year-old hiding vulnerabilities resulting from being sexually abused in a children's home. It left her with a general distrust of men - although cameraman, Josh, lives and hopes to change all that. But her job is based on a false claim to have a degree in ecology, and she dreads this being discovered. Fame seems the only way to underpin her new career, so she is willing to take risks. She shares with the reader her worries and fears, her thinking about the certainty of two murders, the humorous elements of her job, and the anger she feels against her abuser - and a father who abandoned her as a child of three after her mother's tragic accident. Death threats are just one of her problems during Jen's investigation into Digby. Now she understands why the police gave up and finally accepted his wife's death was accidental. Nothing is plain - apart from the fact there must be a killer in the house. But was there was one death or two? One murderer or two? And will Jen's newly acquired self-defence skills be enough when the knives come out? REVIEWS: A fine melding of mystery thriller and contemporary fiction, but refreshingly free of the cliches of either, 'The Grave Concerns of Jennifer Lloyd' is... an impressive accomplishment. Kingsley has an exceptional eye for detail... and his acerbic pen maintains a prevailing sense of authenticity without the need for grandstanding or false climaxes. Jennifer Lloyd is the catalyst that makes this work. Methodical and confident as she follows her investigation, there's a certain naivety to her character that Kingsley teases out. It's an inspired touch which allows for a timely infusion of humour, but more importantly it encourages our concern for her wellbeing as she pursues her pathway to fame. This is further accentuated by Kingsley's first person narrative and paves the way for a cracking denouement. These alone are reason to turn the pages but, in the final analysis, it's the simple elegance with which Kingsley writes that proves unrelentingly endearing... Recommended without reservation. -Book Viral From its first paragraph [the novel] draws readers in with a flash and a bang... Murder mystery and thriller readers will relish this. The feisty and conflicted world of Jen... makes for a powerful, compelling read that's hard to put down. -Midwest Book Review [This] is a thrilling murder mystery by Ian Kingsley, with an authentic British flavour. Our title's heroine, Jennifer, is an up-and-coming television reporter with fierce ambition and massive dreams of success. Despite the disadvantages of her orphan status in the past, Jennifer is bright and positive about the future, particularly when she spots a suspicious opportunity to make a really big journalistic discovery... Ian Kingsley has created a charming and real young woman whose ambition and logic usually prevail, but who has genuinely believable faults which could also be her undoing... The action and thrills of this novel come from somewhere authentic, which makes them all the more entertaining. -Readers' Favorite
Toon meer Toon minder