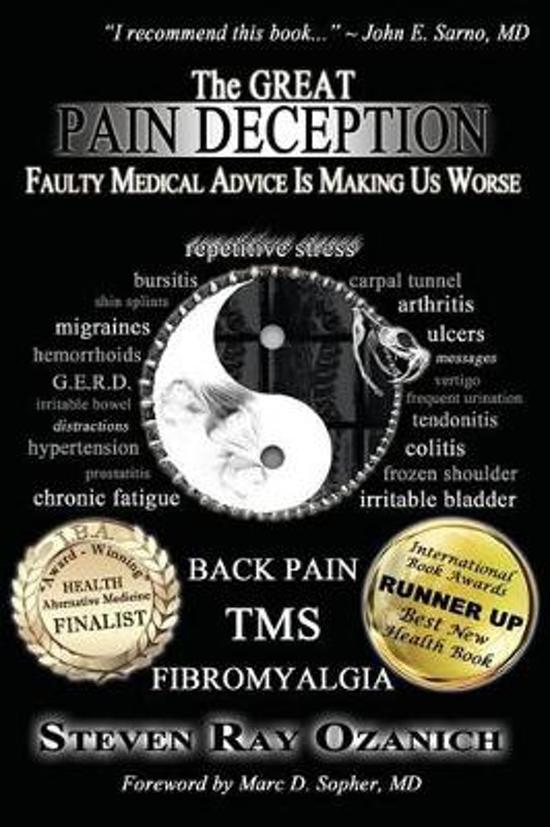 
"I recommend this book." John E. Sarno, MD
"I consider this to be the definitive encyclopedia of TMS." Paul Gwozdz, MD
"There is great wisdom and clarity here. I highly recommend this book and its message." Christiane Northrup, MD
"Steve has done an excellent job exploring the realm of mindbody medicine, making this an excellent resource for those who are still looking for answers." Marc Sopher, MD
"This is a really really great book " Janette Barber
Recipient of 2 awards in the 2012 International Book Award contest. The Great Pain Deception was awarded Runner-Up Finalist in "Best New Health Book" of 2012 and also honored as Finalist in "Health: Alternative Medicine."
Back pain, knee pain, shoulder pain, hand and foot pain, rarely come from herniated discs and joint failures. Pain, such as fibromyalgia, is a deception of the mind created by the brain to keep dark, threatening, and sad emotions from entering consciousness. The vast majority of pains and symptoms emanate from a mindbody process stemming from a personality of perfectionism. However, pain is not "in the mind" of the sufferer--and is often misrepresented as such by people who reject a mindbody process for reasons of ego and monetary gain.
Symptoms inside and outside of the body are primarily the result of emotional conflict hidden within the body and outside of awareness. We live in a world of medical marvels. However, those marvels have become a double-edged sword, often creating more problems than they resolve. John Sarno, MD, at the NYU School of Medicine discovered in the 1970s that back pain was not coming from the things seen on the imaging, such as herniated discs, arthritis, stenosis, scoliosis, etc. Pain was coming from oxygen reduction through the autonomic nervous system due to elevated tension levels, but had been errantly linked to the "normal abnormalities" seen on MRIs and X-rays.
Most physicians refused to believe his findings even though his success rate in healing the most troublesome of pain-cases was well above theirs. Dr. Sarno labeled the disorder TMS, or tension myoneural syndrome, currently being called The Mindbody Syndrome. Inside The Great Pain Deception Steve tells his compelling story of a 30-year battle with pain and ultimate healing after discovering Dr. Sarno's work. After Steve healed he began receiving hundreds of emails, calls, and letters, asking for his help--too many to respond to, so he decided to write his experience down in a book. After 10 years of research, Steve has conveyed an amazing testimonial of triumph over tragedy, an inspiring story of healing that is a must read if you suffer from any ailment from mild to severe. The only thing standing between good health, and healing, is ego. Pain and unpleasant symptoms serve a purpose. Disease is the report card of how happy we are; feedback of a life not lived. Symptoms are anger flowing over into the physical realm, signs of internal conflict. Pain and illness are the virtual language of the unconscious mind. When we are untrue to ourselves and needs, living by the codes and wishes of others, denying our deepest desires--symptoms then form to reveal the deeper conflict.
Modern medicine is pointing us toward our bodies in the attempt to cure us through engineering the human system. These high-tech processes are often making us worse by ignoring the message that the body is trying to convey through such things as colitis, irritable bladder, fibromyalgia, skin disorders and an infinite variety of other symptoms, including cancer. This book does an excellent job of exploring the realm of mind within body--and ultimate healing.
Toon meer Toon minder