The Hairy Tails of a Cat Sitter 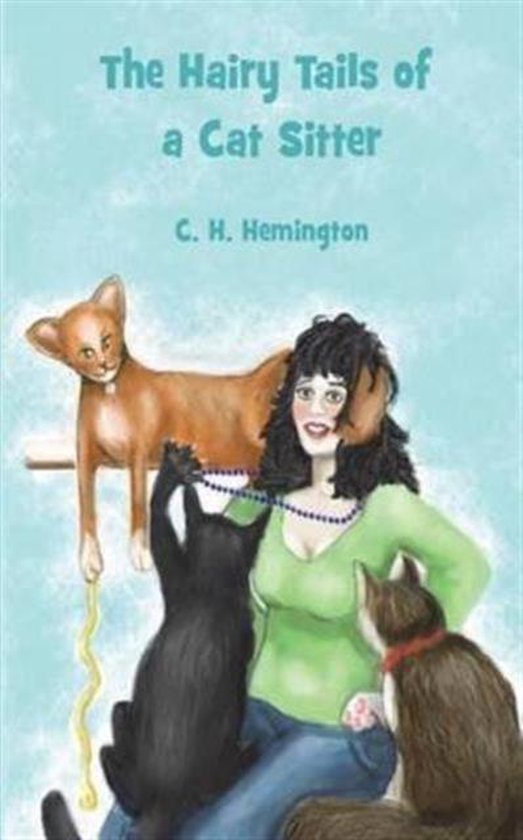 When Kat fulfils her dream of running a cat sitting business little did she know that using a dead squirrel to entice a flea-ridden cat indoors; being dive-bombed by a demonic budgie and stumbling across one client's shocking boudoir secrets would form part and parcel of her daily duties. Despite all this she's able to develop some very special friendships with the quirky cat characters she meets, as well as with their sometimes eccentric owners and oddball neighbours!

The opening chapter revolves around Nanda, a huge Norwegian Forest cat who loves going on long walks with his owner, Crystal Healer Gloria. It's only when Kat takes over cat-walking duties that she discovers Nanda's preference for lounging on her shoulders on a sizzling summer's day. A muddy bottom and embarrassing sweat patches are all consequences of Kat and Nanda's first expedition.

Chapter 2 takes Kat into the homes of cohabiting cats. Olive and Bertha must be kept apart at all times. Conversely, ageing musician Griff and his family of five rock-star named felines live in glorious harmony; not a word that can be used to describe his tribute band "Grunts "n Posers'. Whilst Griff is on the road, Kat enjoys a wonderful summer with the cats and their amazing collection of wooden erections. Wonderful that is until she decides to sit inside the swinging "egg' seat, with all five cats on board.

Fur, feathers and hairless tails all feature in Chapter 3 which focuses on unusual cat companions. There's the ferocious cat Fortune and her surrogate kitten, a rat called Herbert; a large, loved-up hound called Marx and the object of his devotion, Groucho, a grumpy Persian cat. Tiny moggie Bunty is a poppet, unlike her cohabitant, a budgie called Crazy, who takes hostility to new heights. Chickens also prove problematical as Kat tries to coax them into their coup, watched with bemusement by brother cats Biscuit and Barrel.

Chapter 4 sees Kat putting a dead squirrel to good use in an effort to persuade a menacing moggie to come indoors. If only she'd thought about the fleas first.

In Chapter 5 Kat visits Squidge, a cat besotted with lava lamps and who, manages to charm the local constabulary. Elliott, Kat's husband creates an alarm disaster; and then there's "The Pants' flat in which Kat dons a disposable latex suit.

Kat gets a shock in Chapter 6 as a Snake called Sydney, dark lipstick and thigh-length PVC boots all point to one thing in the home of Gordon and Camilla.

Chapter 7 features the neighbours that Kat meets. There's Darren, the obsessively tidy teenager; meddling Marjorie who has marriage in mind for Kat and her cake-loving son Bernard; Petronella who takes her duties as an army reservist almost as seriously as she does her platoon of pussy-cats; shopaholic joy-rider cat Benny and Kitty and Meg, a lovely pair of tipsy twins with a surprising past.

In Chapter 8 Kat puts "operation poo eradication' into place as she deals with Twiggy's "nervous tummy.

Veterinary visits are occupational hazards for Kat who, in Chapter 9 is humiliated by the embarrassingly named Catywampus and tormented by worry over accident prone Smarty's latest misadventure. What she hadn't bargained for was being the centre of her very own car crash catastrophe.

Chapter 10 illustrates the lengths to which Kat has to go to cater for her more finicky felines. As well as discovering luxury foods that would delight the most discerning food critic, Kat delves into the world of raw food recipes, and hand-feeding a frustratingly "nibbly' cat called Colossus.

Drooly Madly Deeply is the final chapter and describes the precious moments Kat shares with her eccentric senior citizen cat clients: Polly who spends her time holding court on the sofa; Boo with his intense stare and list of set requirements for Kat's visits, and Kitzie who's relationship with Kat for the first three and a half years was based on mutual ignoring...until one day it all changed.
Toon meer Toon minder