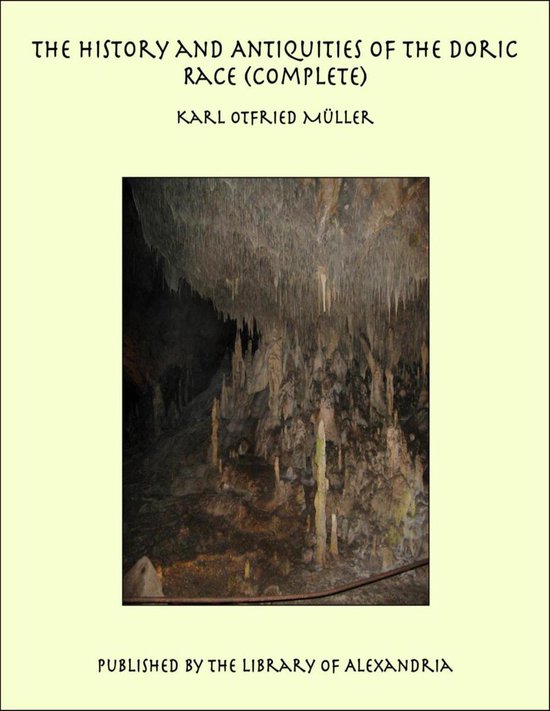 Extract From The Translators' Preface To The First Edition. The History, of which an English translation is now offered to the public, forms the second and third volumes of a work by Professor C. O. Müller, entitled, "Histories of Greek Tribes and Cities." The first volume of this series was published separately under the name of "Orchomenos and the Minyæ;" and contains a most learned examination of the mythology and early history of Orchomenos and other towns of Bœotia, and of the migrations of the Minyæ, together with other questions more or less connected with these subjects. It is, in every respect, a distinct and separate work from the Dorians, comprised in the second and third volumes; nor was it more incumbent on us to publish a translation of that first volume, because it is often referred to in the subsequent volumes, than of the many other admirable works on Grecian history, equally referred to, which are inaccessible to persons not acquainted with the German language. At a time when a large part of the present translation had been completed, the translators communicated by letter to Professor Müller their intention with regard to his work on the Dorians, and requested him to read the manuscript of their translation before it was printed, in case they should have anywhere committed any errors, or failed to catch the import of his words. To this request Mr. Müller, though not personally known by either of the translators, not only acceded, but, with an unexpected, and indeed unhoped-for liberality, expressed his willingness to contribute to our translation all the alterations and additions which his reading had suggested since the appearance of the original work. The manuscript was accordingly transmitted, and carefully revised, corrected, and enlarged by the author. Of the value of these changes it would perhaps be improper that we should speak in the terms which they seem to us to deserve: of their number, however, as this can be brought to a certain test, we will venture to assert, that few books undergo so great changes after their first publication; and that the present work may be in strictness considered, not only a translation, but a new edition of the original. In making these changes, it was also the author's wish to clear up ambiguities or obscurity of meaning, either by a change in the expression, or a fuller development of the thought: and we cannot help hoping, that even to a person acquainted with German, our translation will thus be found in many places more explicit and satisfactory than the original text. Besides those alterations, which appear for the first time in the following translation, the additions and corrections published by the author in his "Introduction to a scientific System of Mythology" have been here incorporated; and a Dissertation on the early history of the Macedonian nation, published separately by the author, some time after the appearance of the Dorians, has been inserted in the Appendix. Not only has the small map of Macedonia, appended to this Dissertation, been inserted in our translation, in addition to the map of the Peloponnese, which was alone contained in the original work, but also a map of northern Greece, which, together with the explanatory article inserted in the Appendix, is now for the first time given to the public. These three maps together furnish a complete geographical picture of ancient Greece, from the promontory of Tænarum to the north of Macedonia; and we may be allowed to say, that in accuracy and fulness of detail, they rival, if not excel, all other maps of the same regions1