The History of the Arts and Sciences of the Antients, ... in Three Volumes. ... by Mr. Rollin, ... Translated from the French. the Second Edition. Illustrated with Fifty-Two Copper Plates, ... Volume 1 of 3 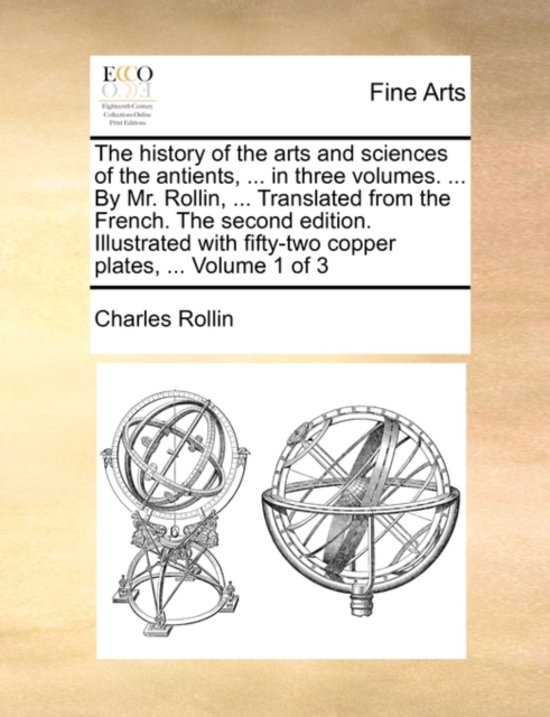 The 18th century was a wealth of knowledge, exploration and rapidly growing technology and expanding record-keeping made possible by advances in the printing press. In its determination to preserve the century of revolution, Gale initiated a revolution of its own: digitization of epic proportions to preserve these invaluable works in the largest archive of its kind. Now for the first time these high-quality digital copies of original 18th century manuscripts are available in print, making them highly accessible to libraries, undergraduate students, and independent scholars.The eighteenth-century fascination with Greek and Roman antiquity followed the systematic excavation of the ruins at Pompeii and Herculaneum in southern Italy; and after 1750 a neoclassical style dominated all artistic fields. The titles here trace developments in mostly English-language works on painting, sculpture, architecture, music, theater, and other disciplines. Instructional works on musical instruments, catalogs of art objects, comic operas, and more are also included. ++++The below data was compiled from various identification fields in the bibliographic record of this title. This data is provided as an additional tool in helping to insure edition identification: ++++British LibraryT136382Compiled from the 'Histoire ancienne des gyptiens'.London: printed for J. and F. Rivington; R. Baldwin; Hawes, Clarke and Collins; R. Horsfield; W. Johnston and 7 others in London], 1768. 3v., plates; 8
Toon meer Toon minder