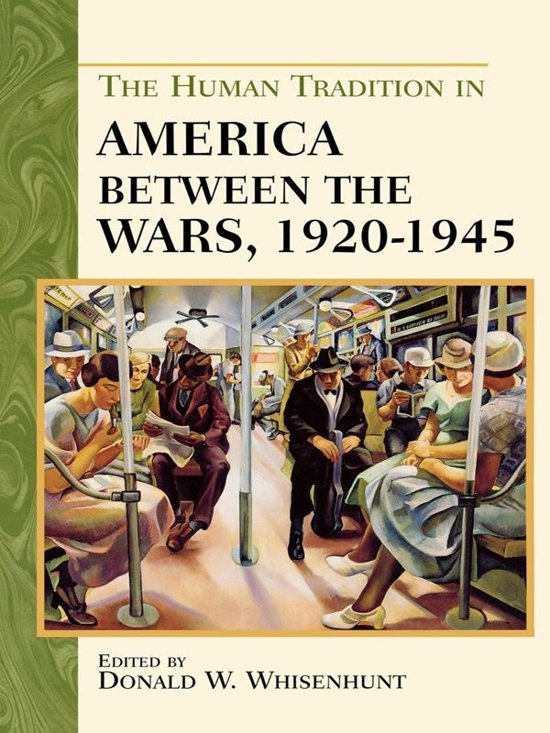 American society in the years from 1920 to 1945 experienced great transformation and upheaval. Significant changes in the role of government, in the nation's world outlook, in the economy, in technology, and in the social order challenged those who lived in this tumultuous period framed by the two world wars.


This transformation lies at the core of this collection of biographical essays. Each individual in his or her own way grappled with the difficulties of the times. Some of those included here were well known in their day and afterwards, but many led lives now obscured by the passage of time. In these essays are men and women, African-Americans, Hispanics, whites, and Native Americans from all regions of the country. Written by leading and rising scholars, these never-before-published pieces provide students with a greater understanding of a period that in many ways represents an important last chapter in the creation of modern America.


Providing a rich portrait through biography of the interwar years, The Human Tradition in America between the Wars is an excellent text for the following courses: Twentieth Century American History to 1945, American history survey, the Depression and the New Deal, and American social and cultural history.

The Human Tradition in America between the Wars, 1920-1945 describes and analyzes artists, politicians, and other individuals-representative figures including the popular and the obscure. Often driven by a single purpose, these Americans experienced and altered the tides of their times. Written in simple, eloquent language, and intellectually honest, these character portraits help illuminate the human condition by linking the microcosm to the macrocosm. -- Glen Jeansonne, University of Wisconsin-Milwaukee, author of Transformation and Reaction: America, 1921-1945 The biographical essays in this volume are not only compelling in their readability but also highly instructive with respect to the nature of the American social order in a crucial period of change. Additionally, these pieces provide insights from disciplines apart from but intersecting with history. The essays illuminate relatively unknown lives that were integral parts of a larger mosaic of historical contributions and illustrate significant aspects of both mainstream and minority experience. Instructors seeking to convey the diversity of American experience and to help students understand that real people at all levels make history and that study of it can inform other fields should find the volume highly useful. -- Ellis W. Hawley, University of Iowa Professor Whisenhunt provides an excellent sampling of some of the less traveled historical byways of this period of U.S. history. The selection of individual biographies, ranging from Jimmie Rodgers and Ma Rainey to A. J. Muste, Frances Perkins, and Meridel Le Sueur, is particularly felicitous, with an excellent mix of the familiar and the unknown, including far more than the traditional token bow toward women, minorities, and working-class individuals. This book will make a great supplement to more mainstream texts for classes on the interwar period and will provide interesting new perspectives for general readers wishing to learn more about this important era in American history. -- Kent Blaser, Wayne State College The Human Tradition in America between the Wars, 1920-1945 is a masterpiece. The objective of all the books in this series is to bring major issues down to the level of ordinary people and in that way offer a perspective not often seen. Donald Whisenhunt has achieved and exceeded this objective. -- Kenneth E. Hendrickson Jr., Midwestern State University
Toon meer Toon minder