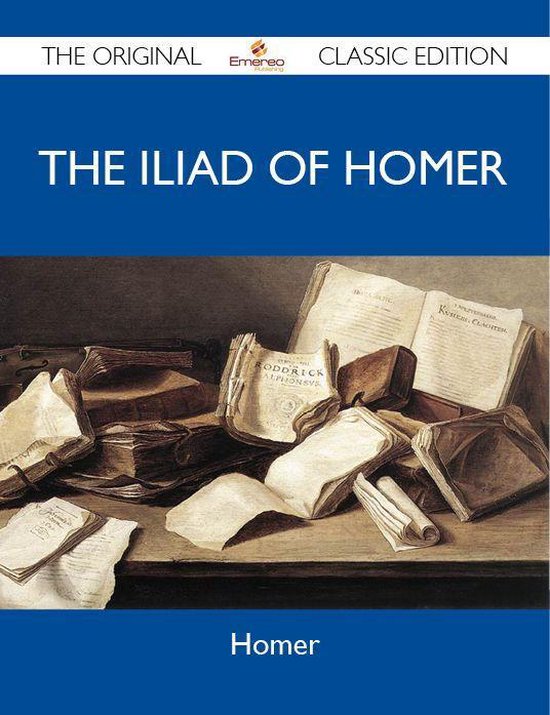 The Iliad is typically described as one of the greatest war stories of all time, but to call it a war story does not begin to describe the emotional sweep of its action and characters: Achilles, Helen, Hector, and other heroes of Greek myth and history in the 10th and final year of the Greek siege of Troy.


This is a high quality book of the original classic edition.


Those who maintain the Homeric poems to have been written from the beginning, rest their case, not upon positive proofs, nor yet upon the existing habits of society with regard to poetry?for they admit generally that the Iliad and Odyssey were not read, but recited and heard,?but upon the supposed necessity that there must have been manuscripts to ensure the preservation of the poems?the unassisted memory of reciters being neither sufficient nor trustworthy.


... Moreover, there is a strong positive reason for believing that the bard was under no necessity of refreshing his memory by consulting a manuscript; for if such had been the fact, blindness would have been a disqualification for the profession, which we know that it was not, as well from the example of Demodokus, in the Odyssey, as from that of the blind bard of Chios, in the Hymn to the Delian Apollo, whom Thucydides, as well as the general tenor of Grecian legend, identifies with Homer himself.


...There seems, therefore, ground for conjecturing that (for the use of this newly-formed and important, but very narrow class), manuscripts of the Homeric poems and other old epics,?the Thebais and the Cypria, as well as the Iliad and the Odyssey,?began to be compiled towards the middle of the seventh century (B.C. 1); and the opening of Egypt to Grecian commerce, which took place about the same period, would furnish increased facilities for obtaining the requisite papyrus to write upon.


...If, however, the Homeric ballads, as they are sometimes called, which related the wrath of Achilles, with all its direful consequences, were so far superior to the rest of the poetic cycle, as to admit no rivalry,?it is still surprising, that throughout the whole poem the callida junctura should never betray the workmanship of an Athenian hand, and that the national spirit of a race, who have at a later period not inaptly been compared to our self admiring neighbours, the French, should submit with lofty self denial to the almost total exclusion of their own ancestors?or, at least, to the questionable dignity of only having produced a leader tolerably skilled in the military tactics of his age.


...As to this little poem being a youthful prolusion of Homer, it seems sufficient to say that from the beginning to the end it is a plain and palpable parody, not only of the general spirit, but of the numerous passages of the Iliad itself; and even, if no such intention to parody were discernible in it, the objection would still remain, that to suppose a work of mere burlesque to be the primary effort of poetry in a simple age, seems to reverse that order in the development of national taste, which the history of every other people in Europe, and of many in Asia, has almost ascertained to be a law of the human mind; it is in a state of society much more refined and permanent than that described in the Iliad, that any popularity would attend such a ridicule of war and the gods as is contained in this poem; and the fact of there having existed three other poems of the same kind attributed, for aught we can see, with as much reason to Homer, is a strong inducement to believe that none of them were of the Homeric age.