The Incompetent Manager The Causes, Consequences and Cures of Managerial Derailment 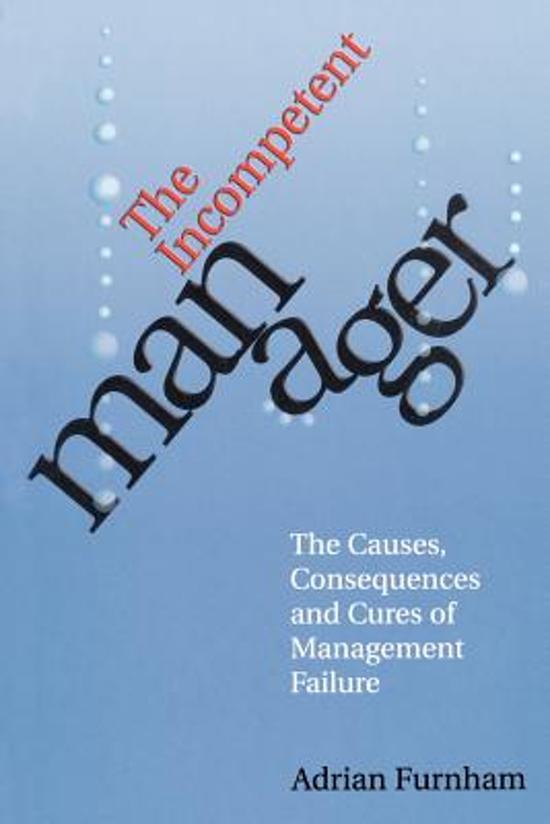 A surprisingly large number of people claim to have worked for a manager who was clearly incompetent. Some people even believe, that in certain sectors, the incompetent outnumber the competent. This book looks at when, why and how managers become incompetent and what to do about it. It does so with both science and humour by reviewing what we know about competences, about personality theory and about various salient psychiatric disorders. So many management books are unrealistically optimistic. They portray management as a simple task once one has absorbed the magic silver bullet message of the book. But managing people is, and will remain difficult as any manager knows. Management is about ability and skills, attitude and values, knowledge and understanding, but also about personality and mental stability. This text investigates normal and abnormal incompetence. The former is where people have a poor fit between themselves (personality and ability) and the job. Through post selection, inadequate training, changes in the job or unwise promotion misfits occur which leads to incompetence. The longest chapter in the book looks at abnormal incompetence and what are called personality disorders. Well--known psychiatric disorders are described in detail and how to spot these in managers. Thus, the paranoid or sociopathic, narcissistic or passive--aggressive types are described in everyday language as well as how to deal with them. More importantly, the book considers how the pathologically incompetent managers influence organizations and groups to fulfil their often bizarre needs and wishes. The final section of the book attempts to help the reader correctly diagnose incompetence. It also offers various possible cures: the emphasis is that cure follows correct diagnoses. Some cures for incompetence actually accentuate it. The book is both serious and funny. The incompetent manager is no laughing matter for those managed by them. But the sort of thing some incompetent managers believe and do can be, at least for the onlooker, very funny indeed.
Toon meer Toon minder