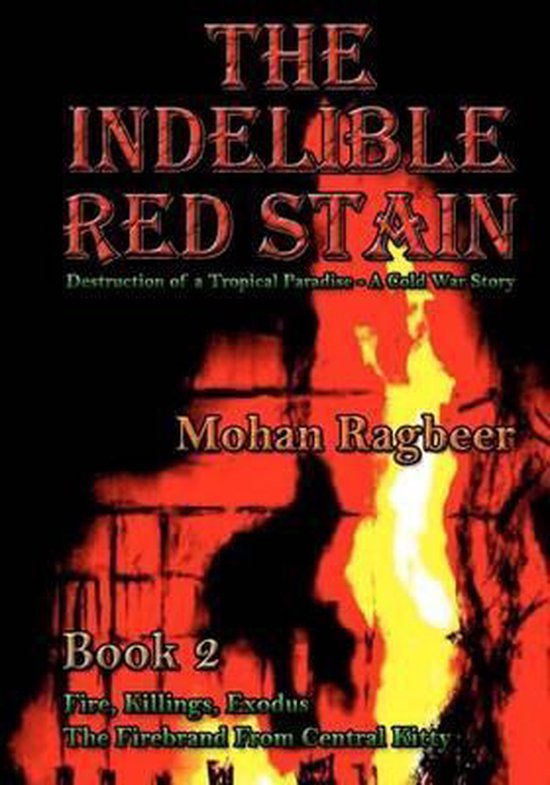 Product Description: Book2, The Indelible Red StainDogged by poor planning, delays, dangers, food shortage and ominous fears of political violence in British Guiana’s capital, and the collapse of the country itself, the team found ways to address problems cooperatively and to examine factors that promoted such action. Multiracial societies – increasing globally – must learn the ways of component cultures, not only to live and work in harmony, but to become enriched and nobler by appreciating and possibly embracing one another's core values, shedding biases, and thus emerge with a superior model.This volume describes the return journey. Sharp drops in river levels make the trip slower and more perilous, with near-death events requiring unified responses, giving added impetus to learn the values of various cultures and remove stereotypes and biases. The amazing history of India and richness of Indian culture are stunning revelations to the Africans, schooled to denigrate things Indian while learning little of their own; they agree that multicultural education was indeed essential.Back on the coast, the men learn that the team-leader’s brother, a Georgetown detective, had just been murdered by Blacks as followers of Forbes Burnham attempt to oust his former ally, the country’s Indian Premier Cheddi Jagan, using raging mobs; their weapons are robbery, anarchy, fire and murder. The country becomes a heated theatre in the Cold War, as CIA and other US agencies join Burnham’s thugs to unseat Russian-backed Jagan.Despite insistent urgings by well-wishers who had detailed a superior route to self-reliance and true freedom without Cold War union Jagan incredibly flaunts his communism and the promises of Soviet friends, and ignored American threats. His weak and humble supporters begin to pay the price with their blood, their livelihood and their hopes, as first injuries then killings and property seizures terrorised them to flee.The author paints a vivid canvas of the civil strife and race riots that destabilise Guyana, from the unique perspective of a man on the spot; he witnessed the great 1962 fire in Georgetown from so close that his camera shutter jammed, his film bubbled curtailing his record. His friend, a Police Superintendent was killed by a rifleman in a riotous mob when he confronted them earlier that day. A year later he was facing down a similar mob, and a rifleman who begged his leader for leave to kill. The author had to join the flight and leave behind the flash of fire and blood swamping his native land, to escape the red stains that marked Britain’s Empire, McCarthy's USA and the USSR and threatening to tarnish all.It is a fearsome and tear-jerking thing to see your community, your family and your beloved country ravaged by fellow citizens, global powers and thugs in the pay of local and foreign enemies. But Mohan Ragbeer tells it well, and brings a much needed perspective on Premier Jagan, one of the villains of the piece, who has long been an impostor posing on a hero’s pedestal. Guiana is a proper biopsy of the world’s dilemmas and struggles; its lessons have universal relevance. This text draws widely on global experiences with analogies, histories, human stories and behaviour, all with universal reach and appeal. The book’s audience is by any measure global and no one stands to lose who studies the actions of those who populate the pages or call themselves leaders. Look around you; they're everywhere.This is a monumental work of the highest quality of writing and scholarship, an eyewitness account by a keen observer. It is a light on a dark corner of history, a damaging new portrait of a failed political leader, the consuming self-interest of international powers and the extent of the perfidy they would unleash however innocent the target, and a searing message for the future. Never let your country walk this way. The text is enriched with references, personal stories, photos and insightful epigraphs.
Toon meer Toon minder