''The Jews' State'' is over one hundred years old. The work is both catalyst and prophecy. Catalyst: Speaking both to Jews and to the international community, it virtually launched the modern debate about a modern state for Jews. Prophecy: it foretold the entire scope of this debate, its timing, its spread, its nature, its parameters. It is all there in embryo for us to read and ponder. This little book continues to inform conceptions and arguments about the position on Jews in their state and in the world, and about the relationship between Jews and their fellow human beings. In a very real sense, it still deeply guides how we view the contemporary Middle East.

Translated and retranslated countless times and into many languages since it was published, this present translation is one of only three English versions that have been attempted in the century since its first publication, the first in English in twenty-five years. Its concerns are both text and context. Though the text has been with us ever since is publication, it is the context that needs recreating. Among the factors that have created distance between us and the world in which The Jews' State was created include: The experience of the world and the Jewish community during the last century, the salience of anti-Semitism, the Holocaust, the formations and development of the state of Israel, the troubled existence of the Jewish state ever since its inception, the continuing Jewish diaspora and its relationship with the state and world. The common understandings which Theodore Herzl assumed in his readers have dissipated and vanished, and with them a sense of his book's import and impact. These understandings need to be retrieved and recreated.

The present edition is therefore an attempt both at presentation and retrieval: Presentation of the text in the language of today: retrieval of the context which gave rise to it. This dual function informs the three main parts of this edition. Its first part is an account of the ideological and social worlds in which Herzl worked and wrote, the Jewish world and the mainstream world, and it argues that Herzl's interaction with both these worlds rests on some complex attitudes on his part in which approval, compliance, critique, and rejection all played a role. There follows a section on The Jews' State itself, which picks up on the main themes that occupied Herzl, and discusses their scope and treatment. This first part finishes with a description of the initial impact of The Jews' State on Herzl's world.

The second part of this edition offers a presentation of the text itself, in the form of a translation, which attempts to recreate in a modern idiom the content of the work as well as some of the peculiarities of Herzl's style. The third part of this edition consists of a critical glossary, dealing with some salient issues in translation as well as the explanation of a number of terms and allusions in the text, whose meaning is not immediately obvious to modern readers. The edition closes with a bibliography.'' 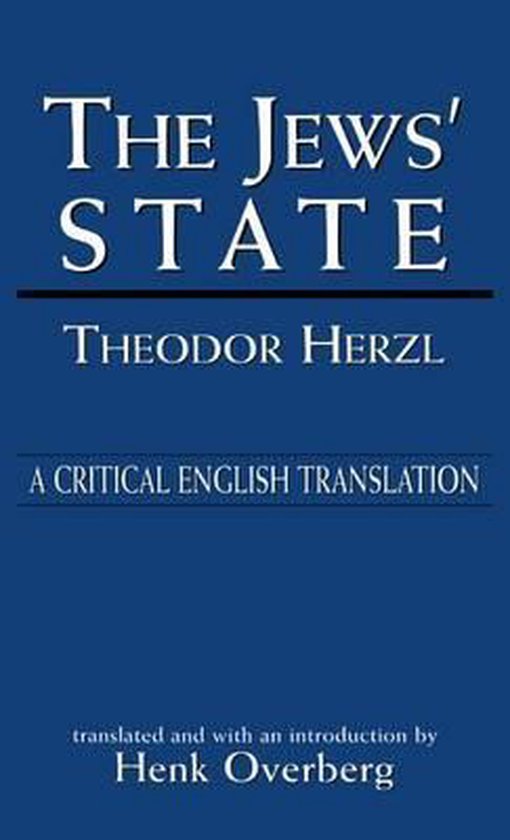