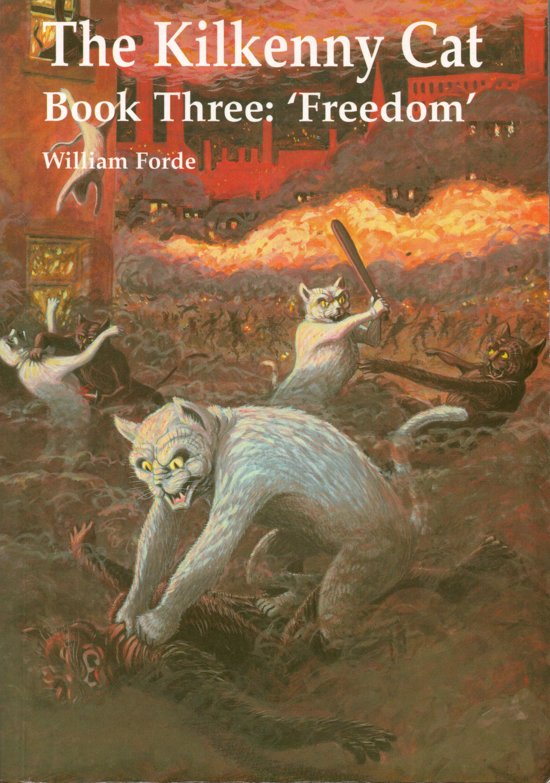 This author's works have been praised by numerous celebrities, the most notable being Nelson Mandela who described two of his African stories as 'Wonderful', the late Princess Diana who used to read two of his books to the Princes William and Harry when they were aged 9 and 7 years, and a former Chief Inspector of Schools for The Office for Standards in Education, Children's Services and Skills (OFSTED), who described the author's writing to the press as being of 'High quality literature.'

The Kilkenny Cat has been written as a trilogy. Book One deals with the theme of "truth', Book Two with "justice', and Book Three on the theme of 'freedom'.

All three books seek to show that truth, justice or freedom cannot exist in isolation, and that the only way one can experience any one of them is when one is able to experience all three.


Book Three is set in the English North and has as its backdrop, the riots that embraced this area from the 1990s onwards. Recent riots all around the country merely reflect how deeply rooted the 'gang culture' of Great Britain has since become.


The trilogy is designed to show that every country on the face of the Earth exercises discrimination against some of its citizens. The nature of discrimination may subtly change and vary from one country and situation to another in both shape and form, but it will always be present in some degree for those of us who care to look.

These issues are looked at through the eyes of travelling cats, whose experiences mirror those of human society. Overarching all the themes of this trilogy is the issue of "Good' versus "Evil', where the terms "God' and "Satan' are used to denote opposing values, qualities and lifestyles.

The speech of the cat characters who come from Jamaica is distinguished from the speech used by non-Jamaican cats by changing the word "you' to "ya' and its linguistic associates, and no attempt has been made to replicate the patois more commonly used by many Jamaican citizens.

The Kilkenny Cat Trilogy is an allegorical story of all manner of discrimination practised throughout the world; and particularly in Ireland, Jamaica and England. Told through the eyes and experiences of travelling gypsy cats, it is a must for all cat lovers and students of the discrimination, the 'Northern Riots', Ireland, Jamaica and Northern England and 'Good v Evil.' It is suitable for reading by teenagers and adults.