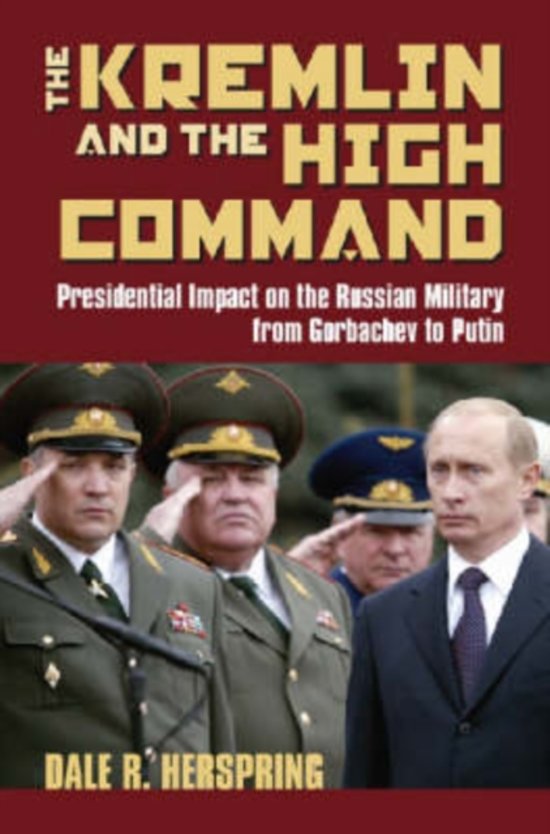 Throughout its existence, the Red Army was viewed as a formidable threat. By the end of the Cold War, however, it had become the weakest link in the Soviet Union's power structure. Always subordinate to the Communist Party, the military in 1991 suddenly found itself answering instead to the president of a democratic state. Dale Herspring closely examines how that relationship influenced the military's viability in the new Russian Federation. Herspring's book is the first to assess the relationship between the Russian military and the political leadership under Presidents Mikhail Gorbachev, Boris Yeltsin, and Vladimir Putin. He depicts an outmoded and demoralized military force still struggling to free itself from Cold War paradigms, while failing to confront not only debacles in Afghanistan and Chechnya but also a rise in crime and corruption within the ranks. He reveals how Gorbachev neglected the military to save Russia from internal collapse and how Yeltsin reneged on continuing promises of support. And, while Putin claims a better understanding of the armed forces, he has severely tightened his control over the military while monitoring its struggle toward modernization. Herspring argues that presidential leadership - or a significant lack thereof - has been the key variable determining the kind of military Russia puts in the field. It has been up to the president to ensure that the high command makes a successful transition to the new polity - otherwise combat readiness will decline and generals and admirals could become politicized. By focusing on how the high command has reacted to each president's decisions and leadership style, Herspring shows that, in spite of the continued importance of the military's bureaucratic structure, personality factors have assumed a much more important role than in the past. The Kremlin and the High Command provides the most complete analysis to date of the Russian president's influence on the Russian officer corps, the soldiers they lead, and their army's combat readiness. It also suggests how the often fraught relationship between the president and the high command must evolve if the Russian Federation is to become a truly democratic nation.
Toon meer Toon minder

In this well-written and quite readable book, Herspring breaks new ground and provides a useful tool for anyone interested in the current state of the Russian military. In seven chapters, Herspring presents handy introductions and great summaries of each leader, including a description of their respective leadership style, as it pertains to the military. Herspring also brilliantly details the main events in Russian military history. --H-Net Book Reviews A masterful presentation of fact by an author who has thoroughly researched his material and presented a clear point of view as to how events actually occurred. Anyone wishing to develop a greater understanding of the military and civil-military relationship of the last generation of Soviet/Russian leadership needs to read this truly indispensable account. --Parameters Herspring provides a readable overview not only of presidential-military relations in the period, but also of the state and activities of the Soviet and subsequently Russian armed forces. --The International History Review Hersping has done a masterful job of explaining the personalities, complexities, and intrigues between Russia's political and military leaders during the past two decades. This is an essential text for modern Russian historians and those interested in civil-military relations. --The Russian Review Herspring makes a persuasive case for the tremendous impact political leadership often makes on institutional development in transitional states. The writing is crisp, the insights are original, and the arguments are convincing. This is a major contribution to the literature; indeed, no finer book is available on Russian military politics. Highly recommended. --Choice An important and authoritative study that provides one of the most perceptive, readable, and sure-footed analyses of a complex phenomenon. . . . Essential reading for anyone trying to understand the condition of Russia's army and how it relates to civil authorities. --Richard Sakwa, author of Putin: Russia's Choice Clearly and cogently catalogs the many problems the Russian state and its armed forces face, all the while suggesting solutions within the context of what has occurred in the past. --David M. Glantz, author of Colossus Reborn: The Red Army at War, 1941-1943
Toon meer Toon minder

Originele Titel
The Kremlin & the High Command: Presidential Impact on the Russian Military from Gorbachev to Putin