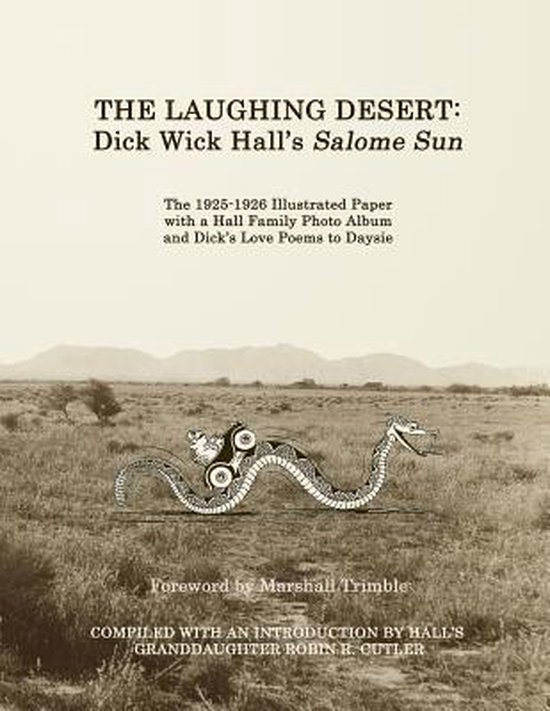 For the first time since the 1920s, The Laughing Desert presents the 1925-1926 Salome Sun by Arizona humorist and the "Sage of Salome," Dick Wick Hall. These thirty-two issues of the nationally syndicated weekly newspaper are packed with stories, poems, down home philosophy and Claude G. ("Put") Putnam's illustrations that made the town of Salome famous. Hall poked fun at bankers, Wall Street, all forms of pretension, and even himself. This book also includes previously unpublished photos of Salome and the Hall family, love poems from Dick to his wife, Daysie Sutton Hall, plus images of Arizona's McMullen Valley in the 1920s. Hall's granddaughter, educator and historian Robin R. Cutler, created The Laughing Desert for Arizona's Centennial. Her introduction places the engaging newspaper in its historical context and she includes an epilogue about her grandfather's enduring legacy. Marshall Trimble, Arizona's Official State Historian and a prolific author, educator and sought-after entertainer provides the Foreword. Fun for readers of all ages, The Laughing Desert is ideal for those who love the history, literature, humor, romance and colorful landscape unique to the American West. It's a unique gift and a great resource for classrooms or book groups; the replicas are filled with material teachers at all levels may use to liven up discussions about desert life and Arizona literature and history. Readers will smile as they follow the quirky adventures of Dick Wick Hall, his seven-year-old Frog that could not swim, and desert characters such as Chloride Kate, the Reptyle Kid, Cactus Callie, Gila Monster Jake and cub reporter Archie Bald Doveface. As an early ad for the paper put it, if you enjoy the great outdoors and laugh at the West of Mark Twain, Owen Wister and Charlie Chaplin "you will be hilarious over the Salome Sun." Each 8.5 by 11 inch issue of the 4-column paper fits on a separate page. DISCOUNT CODE AVAILABLE FOR SCHOOLS, COLLEGES, LIBRARIES, MUSEUMS, STORES AND ANY ORDERS OF FIVE OR MORE COPIES. CONTACT RRCutler@gmail.com. For more information about the Hall family and Dick's daughter Jane Hall's journey from Salome to Hollywood where she was an MGM screenwriter during the studio's Golden Age, see www.robinrcutler.com
Toon meer Toon minder