The Legacies of Darkness Four Thrilling Short Stories in One Book! 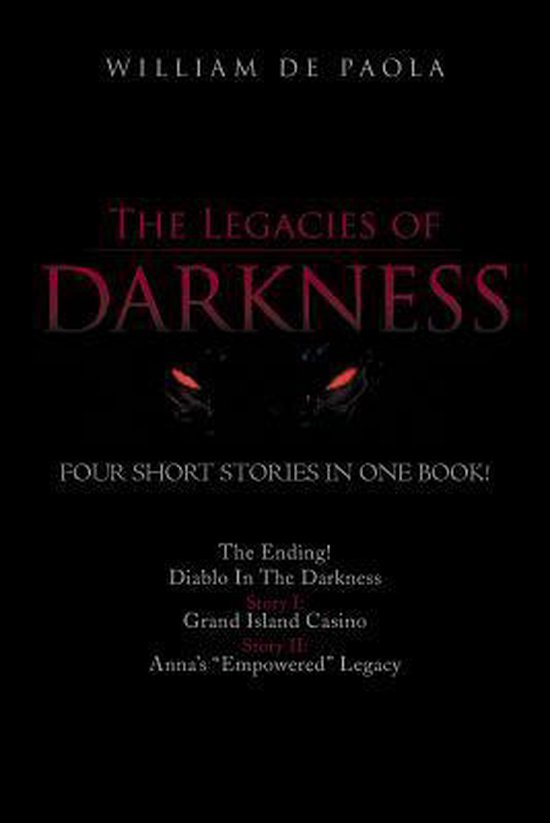 Welcome to the 1st Series of THE LEGACIES OF DARKNESSEnjoy Four Unique stories that will Thrill you with their own Special Twist of Fate The stories are widely developed with a character and setting in mind that one can easily relate to, a storyline that is exciting and thrilling and a book that keeps you interested on what's going on next, not easily forecast the ending it is why these Legacies of Darkness stories are attention grabbing as well as unique reads,,, each book will captivate all enthusiast! The variety of stories are ALL unique like in this 1st book''Diablo in the darkness story'', a purgatory for 4 soul less persons - one of them is a molesting priest, another a suicide bomber - when they die as in the suicide bomber who thinks he is going to heaven to get his many beautiful virgin wives but awakening and finding something very evil waiting for him in a hell like setting or a molesting priest he has not god waiting with open arms but an underworld and a hot black box burning his body many times to cleanse his misguided soul, all affected by their past before they can go anywhere - but all stories especially like in the Diablo in the Darkness has a special twist revealing an interesting ending making it a very insightful read. Enjoy the stories they are unique thrillers, they are attention grabbing and insightful readings there is always something waiting for some-one's destiny and that is why I write about The Legacies of Darkness! Attention grabbing, each story is guaranteed to keep you turning the page until you reach the heart pounding conclusion. Each story has a unique set of characters whose lives and destiny are determined by the choices they made. ***Potential film - Hollywood has accepted story 1 ''Grand Island Palace Casino'' and is in the works on getting things going - if Hollywood likes it - so will you!*** The Ending A Mob Boss on the run and his beautiful mistress to follow, two lives intertwined in a story of love and deadly betrayal as the Boss finds himself in unfamiliar territory as not in control of the situation and now finding out his mistress has a special other also as they hide out in a house he was never to supposed to see... Diablo in the Darkness No one is exempt from a Purgatory! The story of four criminals, a Serial Killer,,, Suicide Bomber,,, Prison Gang leader,,, and a Pedophile Priest whose souls experience the horror of their crimes against the innocent and the choice they are given. What will they feel as they choose in the end in the thrilling conclusion! STORY I: GRAND ISLAND PALACE CASINO A Texas Holdem Tournament like no other - Play your cards right on Grand Island Palace Casino or the last hand dealt may be your last! 15 Players play the 5 day tournament and losing at their tables is not an option - once they lose they find themselves on a all night survive the night hunted by a special creature set out to find them,,,with the only way back into the mansion is when the sun comes up! Who will survive till the final table to play ''The Man,'' take the money and hopefully get safely off the island? STORY II: ANNA'S EMPOWERED LEGACY Action and good Suspense Thriller as Bill plays the lead role in story 1 and now in story 2, a former CIA and special operations who again fights for his life against a unique group of deadly and unstoppable fighting force as some the past characters from the Island comes back with a new twist of fate and the beginning of a new deadly legacy... * ''Some of the proceeds from the book are going for a K-9 organization used for helping special causes.