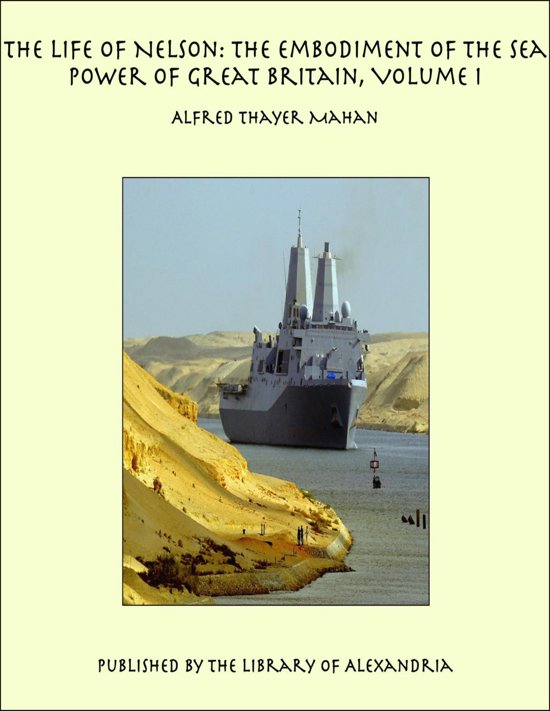 The Life of Nelson has been written so often, that an explanation—almost an apology—seems due for any renewal of the attempt; but, not to mention the attractiveness of the theme in itself, it is essential to the completeness and rounding off of the author's discussion of the Influence of Sea Power, that he present a study, from his own point of view, of the one man who in himself summed up and embodied the greatness of the possibilities which Sea Power comprehends,—the man for whom genius and opportunity worked together, to make him the personification of the Navy of Great Britain, the dominant factor in the periods hitherto treated. In the century and a half embraced in those periods, the tide of influence and of power has swelled higher and higher, floating upward before the eyes of mankind many a distinguished name; but it is not until their close that one arises in whom all the promises of the past find their finished realization, their perfect fulfilment. Thenceforward the name of Nelson is enrolled among those few presented to us by History, the simple mention of which suggests, not merely a personality or a career, but a great force or a great era concrete in a single man, who is its standard-bearer before the nations. Yet, in this process of exaltation, the man himself, even when so very human and so very near our own time as Nelson is, suffers from an association which merges his individuality in the splendor of his surroundings; and it is perhaps pardonable to hope that the subject is not so far exhausted but that a new worker, gleaning after the reapers, may contribute something further towards disengaging the figure of the hero from the glory that cloaks it. The aim of the present writer, while not neglecting other sources of knowledge, has been to make Nelson describe himself, — tell the story of his own inner life as well as of his external actions. To realize this object, it has not seemed the best way to insert numerous letters, because, in the career of a man of action, each one commonly deals with a variety of subjects, which bear to one another little relation, except that, at the moment of writing, they all formed part of the multifold life the writer was then leading. It is true, life in general is passed in that way; but it is not by such distraction of interest among minute details that a particular life is best understood. Few letters, therefore, have been inserted entire; and those which have, have been chosen because of their unity of subject, and of their value as characteristic. The author's method has been to make a careful study of Nelson's voluminous correspondence, analyzing it, in order to detect the leading features of temperament, traits of thought, and motives of action; and thence to conceive within himself, by gradual familiarity even more than by formal effort, the character therein revealed. The impression thus produced he has sought to convey to others, partly in the form of ordinary narrative,—daily living with his hero,—and partly by such grouping of incidents and utterances, not always, nor even nearly, simultaneous, as shall serve by their joint evidence to emphasize particular traits, or particular opinions, more forcibly than when such testimonies are scattered far apart; as they would be, if recounted in a strict order of time. A like method of treatment has been pursued in regard to that purely external part of Nelson's career in which are embraced his military actions, as well as his public and private life. The same aim is kept in view of showing clearly, not only what he did, but the principles which dominated his military thought, and guided his military actions, throughout his life; or, it may be, such changes as must inevitably occur in the development of a man who truly lives. This cannot be done satisfactorily without concentrating the evidence from time to time; and it is therefore a duty a writer owes to his readers, if they wish such acquaintance with his subject as he thinks he has succeeded in acquiring for himself