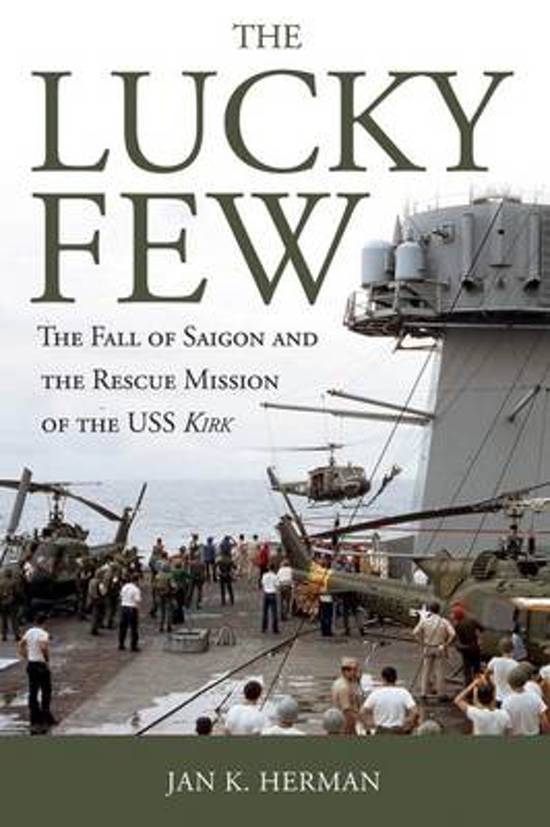 As the Vietnam War reached its tragic climax in the last days of April 1975, a task force of U.S. Navy ships cruised off South Vietnam's coast. Their mission was to support the evacuation of American embassy personnel and military advisers from Saigon as well as to secure the safety of the South Vietnamese whose lives were in endangered by the North Vietnamese victory. The Lucky Few recounts the role of the USS Kirk in the rescue of remnants of the South Vietnamese fleet and the refugees on board. The story of the Kirk reflects one of America's few shining moments at the end of the Vietnam War. Now in paperback in time for the 40th anniversary of the end of the war, The Lucky Few brings to life the heroism of Captain Paul Jacobs and the crew of the USS Kirk.

Jan Herman's extensively researched and meticulously detailed account of the USS Kirk during the final weeks of the Vietnam War is a riveting portrait of heroic men in unheroic circumstances; it provides a fresh and essential perspective on this troubled chapter in American history. -- Rory Kennedy, filmmaker Jan Herman's thoroughly researched and beautifully written account of the USS Kirk and her crew's participation in the final days of the Vietnam War, the fall of Saigon, and the evacuation at sea of thousands of Vietnamese refugees underscores both the tragedy and the triumph of war. This book illustrates the dual purpose of our Navy--a weapon of war and also an instrument to provide humanitarian assistance and care anywhere and anytime. This story, lost until this writing, needs to be read by every American sailor and citizen. They will see first hand our Navy in action. They will also see the courage, compassion, and the stellar leadership of Captain Jacobs and his brilliant USS Kirk crew. -- Vice Adm. Adam M. Robinson Jr., MC, USN (RET.), 36th Surgeon General of the U.S. Navy Operation Frequent Wind and the last days of the Vietnam War have remained largely absent from the public eye--until now. What an irony that such a catastrophic war comes to a close with one of the U.S. military's greatest humanitarian efforts of the twentieth century. Jan Herman has conducted tremendous research in The Lucky Few to illustrate the immense courage displayed by the men of the USS Kirk (FF-1087), which led to the successful rescue of over 32,000 South Vietnamese. Congratulations to the men of the USS Kirk and to all of CTF 76-1. -- The Honorable Richard L. Armitage, 13th U.S. Deputy Secretary of State To this destroyer veteran, The Lucky Few is fascinating, though it was difficult to revisit that time of sadness and misfortune. The author has done an outstanding job researching details of day-to-day shipboard life, recalling things that I have not given a thought to in many years. Lastly, he neatly connects surviving refugees and rescuers, revealing many happy endings. I highly recommend this book, believing that enough time has finally passed to allow us to see another amazing triumph of the human spirit. -- The VVA Veteran Historian Jan K. Herman tells the dramatic, inspiring, and 'relatively unknown heroic tale' of one small U.S. Navy destroyer escort's participation in Operation Frequent Wind, the evacuation of Saigon. Herman interviewed officers, sailors, and refugees to recount this fascinating story of American courage, resourcefulness, and unselfishness. -- Military Officer Highly recommended contribution to American military and naval history shelves, particularly those with a focus on the Vietnam War. - The Midwest Book Review The text is supported by a number of excellent photos. Overall, the book adds greatly to the history of the U.S. Navy's Seventh Fleet, and I recommend it to all those interested in Cold War naval operations, the Vietnam War, and aid to a civilian population during a disaster. The story of USS Kirk and the role it played in the evacuation of the Republic of Vietnam's Navy from Vietnam to the Philippines was made into a documentary film by the U.S. Navy, also entitled The Lucky Few, and it has aired on public television. -- The Journal of America's Military Past This is a fine book overall. I recommend the volume to anyone interested in the U.S. Navy's role in Vietnam. -- International Journal of Naval History This well-written account of their remarkable achievement is some sort of catharsis not only for them but for many Americans, and is recommended as a striking demonstration of how navies can perform as humanitarian organizations. -- The Naval Review
Toon meer Toon minder