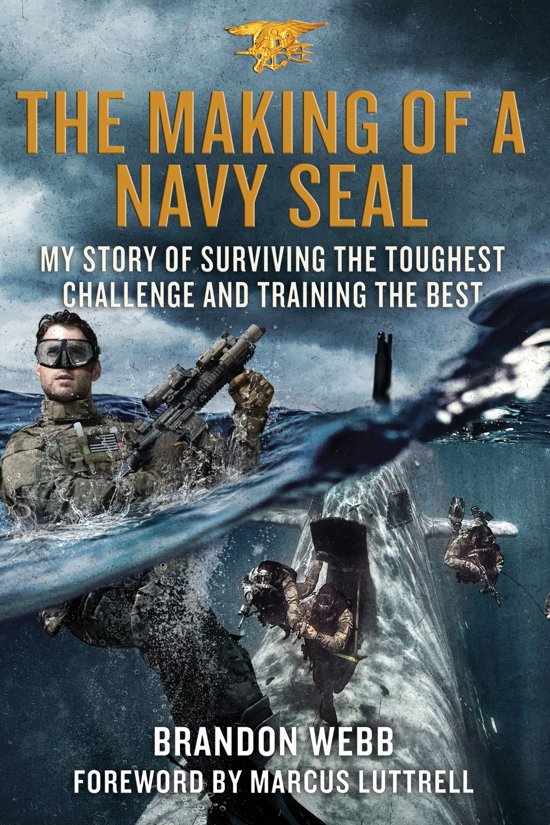 Brandon Webb is a former US Navy SEAL, New York Times bestselling author, and founder and CEO of Hurricane Group, a media and ecommerce business focused on military entertainment, news, and monthly clubs. His titles include The Red Circle, Benghazi: The Definitive Report, The Killing School, and Total Focus.

BEFORE HE COULD FORGE A BAND OF ELITE WARRIORS… HE HAD TO BECOME ONE HIMSELF.


Brandon Webb's experiences in the world's most elite sniper corps are the stuff of legend. From his grueling years of training in Naval Special Operations to his combat tours in the Persian Gulf and Afghanistan, The Making of a Navy SEAL provides a rare and riveting look at the inner workings of the U.S. military through the eyes of a covert operations specialist.


Yet it is Webb's distinguished second career as a lead instructor for the shadowy ''sniper cell'' and Course Manager of the Navy SEAL Sniper Program that trained some of America's finest and deadliest warriors—including Marcus Luttrell and Chris Kyle—that makes his story so compelling. Luttrell credits Webb's training with his own survival during the ill-fated 2005 Operation Redwing in Afghanistan*.* Kyle went on to become the U.S. military's top marksman, with more than 150 confirmed kills.


From a candid chronicle of his student days, going through the sniper course himself, to his hair-raising close calls with Taliban and al Qaeda forces in the northern Afghanistan wilderness, to his vivid account of designing new sniper standards and training some of the most accomplished snipers of the twenty-first century, Webb provides a rare look at the making of the Special Operations warriors who are at the forefront of today's military.

Explosive, revealing, and intelligent, The Making of a Navy SEAL provides a uniquely personal glimpse into one of the most challenging and secretive military training courses in the world.

Grades 7-10. A few weeks past my sixteenth birthday, my dad threw me off a boat in the middle of the Pacific Ocean. So beings a fast-paced autobiography of a young man who would eventually become a U.S. Navy SEAL. A product of a dysfunctional family (his parents had a difficult marriage, and his father was physically abusive), Webb tells his life's story. His parents kept their often-rambunctious son out of trouble by encouraging him to get involved with athletics. That came to an abrupt end when the boy was diagnosed with Osgood-Schlatter disease, which is caused by overtraining, resulting in a painful lump below the kneecap. Braces were put on his knees in order to give them a chance to grow properly. By age 13, Webb was working on a dive boat. A chance encounter with a group of SEALs who visited the boat turned his life around and gave him a new goal. The rest of the book is a description of the experiences he had on his way to successfully realizing that dream: he became a SEAL and even became an instructor for other SEALs in training. This engaging narrative is informative and will speak to teens. VERDICT: A fine choice for memoir collections. --School Library Journal Webb's story makes for a breathless read for the many who will never encounter anything remotely as mentally and physically challenging as the endless training exercises to make it into the SEAL teams. --Booklist What you're about to read is not just the making of a Navy SEAL sniper, but the story of one guy who went on to help shape the lives of hundreds of elite special forces warriors. Brandon has a great story to tell, and it is living proof that you can achieve anything you put your mind to. --Marcus Luttrell, Navy SEAL and bestselling author of Lone Survivor Brandon's story hits center mass! If you want to know what makes up the DNA of a Navy SEAL and have a behind-the-scenes look at the best sniper program in the world, then hold 1 right for wind and read The Red Circle. --Chris Kyle, USN (Ret.), SEAL Team 3 Chief and bestselling author of American Sniper An impressive and well-written account of the most elite snipers in the world. Webb recounts with heartfelt and vivid description the training, trials, and heartache that are all costs of choosing this lifestyle. Like all true warriors, he does no chest thumping, but rather gives an honest account that proves that, after all, SEAL snipers are only human. The Red Circle is a great book. --Howard E. Wasdin, Navy SEAL and bestselling author of SEAL Team Six Another forceful statement from the Brotherhood of SEALs, Brandon Webb's The Red Circle illustrates why he wanted to be a SEAL, what it takes to be a SEAL, how you survive the life of a SEAL, and the value of mind over matter. A valuable read for anyone aspiring to reach goals that seem unattainable--in any walk of life. --CDR Richard Marcinko, USN (Ret.), founding father and first commanding officer of SEAL Team Six and bestselling author of the Rogue Warrior The story of today's Navy SEALs is Brandon Webb's to tell, and The Red Circle does it masterfully. This definitive work at once proves and explodes the myths behind Navy Special Warfare and the men who meet its challenges. Strap in for a wild ride. --CDR Ward Carroll, USN (ret.), editor of Military.com The story is action-oriented, and the very short chapters hasten the pace without adding unwanted choppiness. Webb himself may not be for everyone; as he admits, most SEALs have strong type-A personalities...but, ultimately he is a remarkable serviceman who did, in fact, achieve a great deal. --Voya Magazine
Toon meer Toon minder