The Marshall Plan in Austria - An Analysis 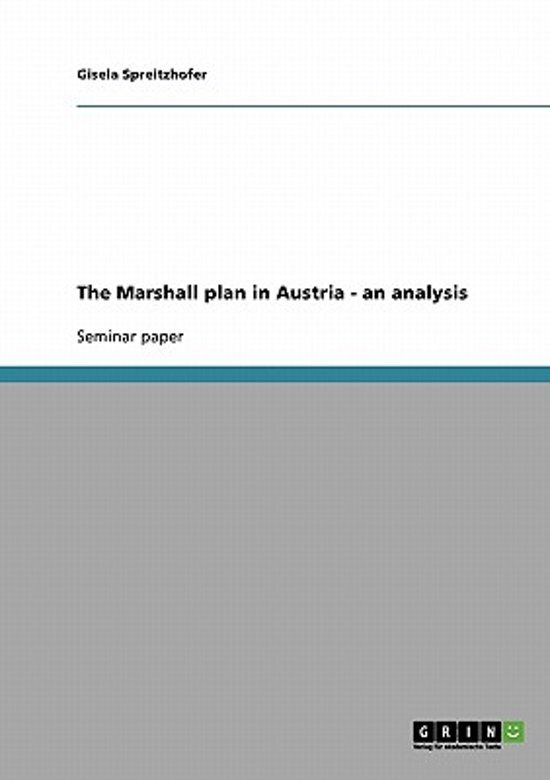 Seminar paper from the year 2006 in the subject History Europe - Germany - Postwar Period, Cold War, grade: A, Johns Hopkins University (SAIS, Bologna Center), 19 entries in the bibliography, language: English, abstract: The Austrian Republic, which had been unable to survive economically in the aftermath of World War I, recovered surprisingly quickly from the serious economic consequences of World War II. In fact, it became one of the world's wealthiest nations within a few years only, achieving extraordinarily high growth rates and per-capita income increases on an international scale. The Marshall Plan's historical role for Austria is a topic that has been rather neglected by historians for several decades. By writing this paper I would like to make a contribution to the memory of the Marshall Plan which was the biggest reconstruction aid project ever. Perhaps no country benefited more from it than Austria: Between 1948 and 1952, the United States supported Austria with goods worth approximately one billion dollars, which cost each American tax payer 80 dollars. Each Austrian received 133 dollars from the Plan, more than any other of the sixteen participating Western European countries. Apart from its economic effect, the Marshall Plan also transported the American way of life to Western Europe and Austria. I would like to start this paper by giving an overview of how Austria's economic situation was like immediately after the end of World War II. The following chapter discusses the birth of the Marshall Plan, first on the Western, then on the Eastern side of the Atlantic. Then I will focus chronologically on the stages of Austria's participation in the Plan, before its impact on Austrian post-war identity-building will be explained. A conclusion will finish the paper.
Toon meer Toon minder