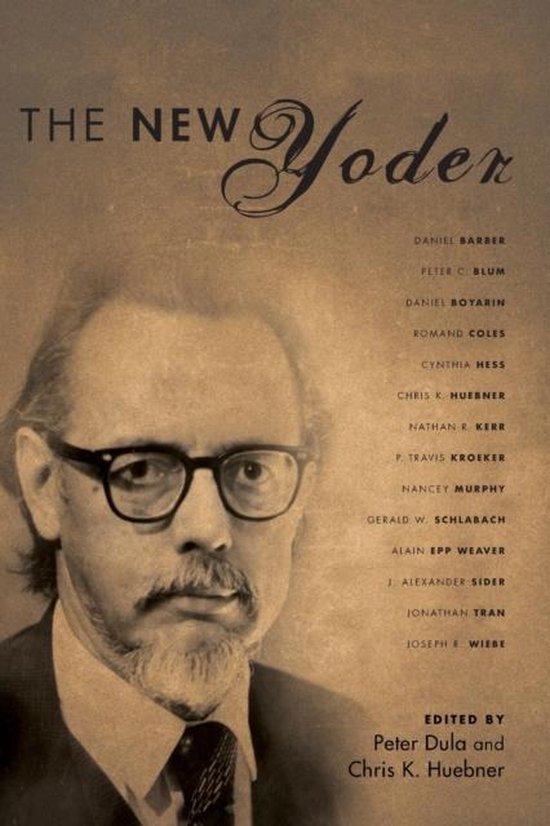 The Work of John Howard Yoder has become increasingly influential in recent years. Moreover, it is gaining influence in some surprising places. No longer restricted to the world of theological ethicists and Mennonites. Yoder has been discovered as a refreshing voice by scholars working in many other fields. For thirty five years. Yoder was known primarily as an articulate defender of Christian pacifism against a theological ethics guild dominated by the Trocltschian assumptions reflected in the work of Walter Rauschenbusch and Reinhold and Richard Niebuhr. But in the last decade, there has been a clearly identifiable shift in direction. A new generation of scholars has begun reading Yoder alongside figures most often associated with post-structuralism, neo-Nietzscheanism, and post-colonialism, resulting in original and productive new readings in original and productive new readings of his work. At the same time, scholars from outside of theology and ethics departments, indeed outside of Christianity itself, like Romand Coles and Daniel Beyarin, have discovered in Yoder a significant conversation partner for their own work. This volume collects some of the best of those essays in hope of encouraging more such work from readers of Yoder and in hopes of attracting others to his important work.

''The New Yoder is John Howard Yoder as dialogue partner both with and against the grain of Adorno, Foucault, Derrida, de Certeau, Horkheimer, Rowan Williams, Said, Stout, Volf, and many more. Here is patient, Christian theological pacifism beyond the either/ors that burdened a previous generation: beyond universalism vs. isolationism, Church vs. world, politics vs. isolationism, Church vs. world, politics vs. quietism, Scripture vs. social activism. Here the eschaton meets postmodernity. The result? Anguished laughter, exilic politics, apocalypse, and dialogue: the work of Yoder-reading for our time.''---Peter Ochs University of Virginia
Toon meer Toon minder