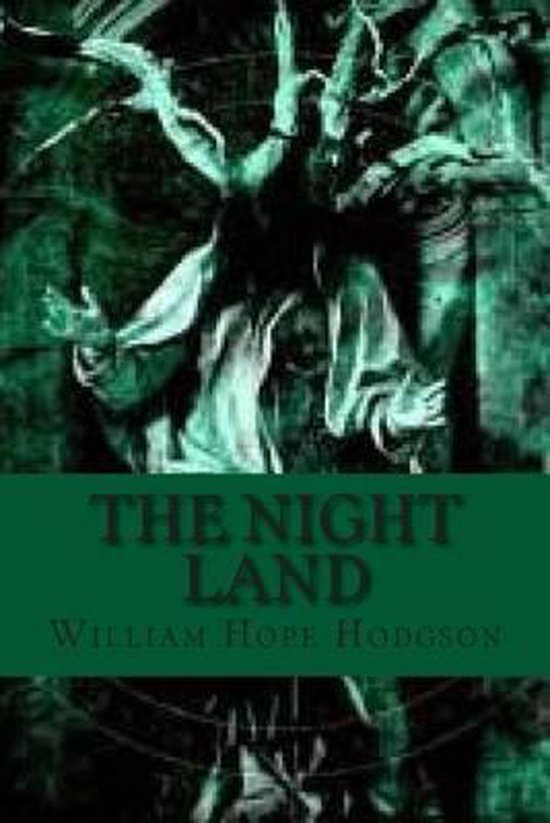 You may say that in “The Night Land” Mr. Hope Hodgson’s reach exceeds his grasp, that his story in some of its details is obscure and difficult to follow, that he tells it in a quaint, archaic language that does not make for easy reading, but at least you cannot say he has not aimed at doing a big thing. He has set himself to unfold a love tale that is not bounded by the limits of a lifetime, but continues and is renewed again at last in a strange dream-life after many centuries. His her is a man of two hundred years ago who loses the woman he loves not long after she is married to him; in utter grief and despair all his thoughts go yearning after her—they carry him far on down the ages yet to be, and he seeks her and cries out for her through new and newer phases of existence until, at length, in a miraculous trans state he finds himself at the close of some millions of years living in the latter days of the world when the powers of evil have grown so potent, so aggressive, so almost all-conquering that the survivors of the human race are gathered for self-defence into one enormous pyramid, building their city tier above their within it, and on every hand all around this Last Redoubt stretches the Night Land, inhabited by primeval, material giants and loathsome monsters and sinister, dreadful immaterial things of the spirit world that have power over the souls of mortals. Here, in this place of refuge, that man of two hundred years ago is continually sending his eager thoughts out across the grim wastes of the Night Land in search of the woman he had loved and lost; and a time comes when out of the vast and unknown darkness her thoughts answer him, and after some broken fashion they are able to communicate with each other. Suddenly this communication fails; he tries in vain to renew it; and fearful that she may have set out across that fiend-haunted dayless wilderness to find him, he takes all due precautions, arms and fits himself for his enterprise, quits the shelter of the Pyramid and begins to make his way in the direction whence he believes she may be coming. From this point onwards the story grows rapidly in power and interest. Whatever Mr. Hodgson lacks it is not imagination, and his description of that fearsome journey by trackless ways and through perils undreamt of before, and of the meeting of those two lovers, and the adventures, by turns grim, terrible, charmingly idyllic, through which they passed together give him scope for painting some of the most eerie, wildly horrible and pleasantly dainty pictures that have ever come from his pen. We shall not attempt to give any full outline of Mr. Hodgson’s romance; it runs to nearly six hundred pages and is crowded with incident and alive with inner significances and undercurrents of meaning. You may read it as a cloudy and elusive allegory, if you have a liking for that sort of literature, but in its allegorical aspect it is not simple enough, it needs too much explaining, and you will do better perhaps to read it simply as a daringly imaginative love story, and as such you will find it a very original and sufficiently remarkable book.
Toon meer Toon minder