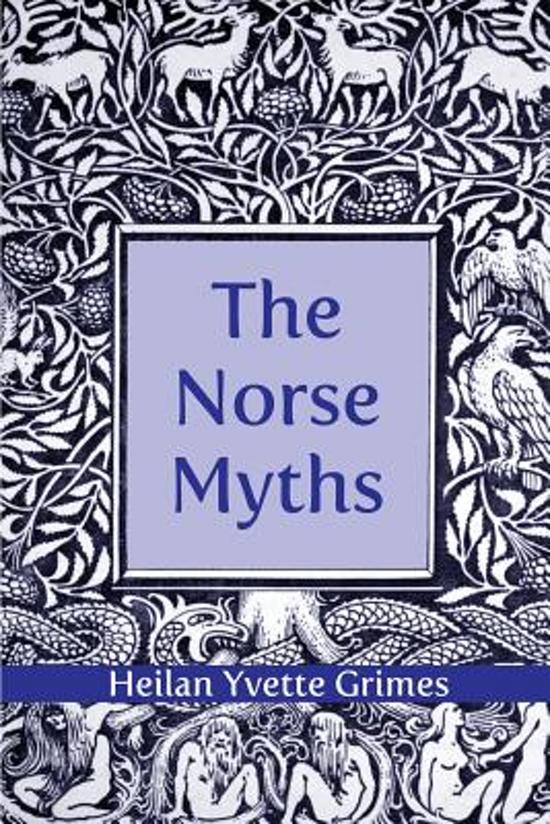 To be captured by the Northern Thing means to be taken with the Norse stories of the Gods. If that describes you, then The Norse Myths should help. It contains the most complete versions of the Norse myths available in the English language. The Norse Myths is presented as a narrative from the beginning of creation to the final great battle of Ragnarok, followed by the Rebirth. The Norse Myths is split into several parts: Part One: In the Beginning. Eight chapters that set up the Universe. Part Two: The Adventures. Twelve chapters about the adventures of Gods, Elves, Jotuns, Humans. Part Three: The Ending of All Things. Overarching in all the stories is Ragnarokr, the Doom of the Gods. Even in the humorous stories there's a sense of fatality. Part Three is eight chapters leading to the final battle (Ragnarokr) and the subsequent Rebirth into a more Utopian world. Finally, there is a complete Glossary of all the characters, places, and objects in the book. The spelling used in the book is presented with definitions of the word and alternate spellings, followed by a complete description. And there's a Genealogy chart showing the familial relationships of many of the characters. Norse mythology comes from the Nordic countries, including Sweden, Denmark, Norway, and Iceland. These countries were heavily influenced by Teutonic (German) mythology. This book contains all of the legends which pertain to the Gods. Future volumes will be about family sagas like The Niebelungenlied (The Ring Saga). There is a deep foreboding, a sense of doom, that pervades Norse mythology. The Gods are not immortal. They can be injured and need to be healed. They can find themselves bent with old age. Against the right enemy they can be killed. From the beginning the Gods know they are in a violent battle of good versus evil. The Gods, mankind of Midgardr, and light elves, are doing what they can to stave off the last battle, Ragnarokr, the Doom of the Gods. They fight against evil giants, ferocious wolves, giant sea serpents, and the cunning Loki. The Nordic countries have harsh winters resulting in a mythology that is darker than most. The Norse hero wants to die a hero's death, in battle, fighting for right. The worst death is the straw death, in bed, old, infirm, and away from the fight. The hero who dies in battle goes to Valhalla or one of the other fighting halls to practice and prepare for the last great battle. Those who die straw deaths go to the torturous halls in Niflheimr. Glory does not await them. Pain, venous snakes, and starvation awaits them. Yet, there is hope . . . always hope. There is the vision of a better life filled with peace and tranquility, the Rebirth. Norse mythology has influenced many fantasy novels including The Lord of the Rings by J.R.R. Tolkien, who taught Norse mythology at Oxford. The Norse Myths will take you to a world of legend with Thor, Odin, Loki, Gods, Goddesses, monsters, giants, and dwarves doing what they can to help or hurt each other.
Toon meer Toon minder