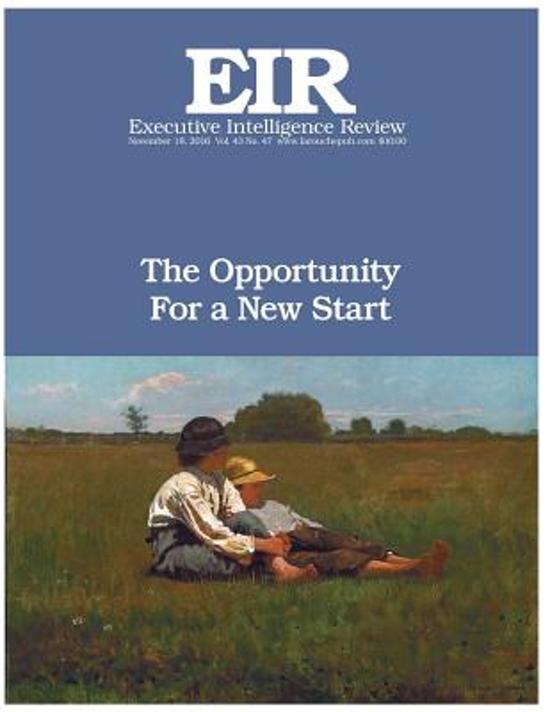 A New Conception of What International Relations Are Lyndon LaRouche spoke as follows in discussion with associates on November 10. “The whole economic system is not ready to work. We’ve got to get that system functioning, not just a few things here and there. We’ve got to pull [together] a special kind of organization which facilitates the ability of getting more parts of the world in the hands of the other part of the world. Otherwise, the thing won’t work. You’ve got to pull things together. If you don’t have a connection, you don’t have a contract. . . What you’re going to see on this question is a more complicated thing. What you’re going to get is an understanding of a new conception of what international relations are. That’s what is going to happen, and that’s the way it will work. Otherwise, it will not work for obvious reasons, for those who are familiar with the details of the German and other economies. “One of the problems is that there is presently no qualified content of developing the relations among these nations. You’ve got to get an actual content, which has to be functional. That’s one of the things we have to work on, but that’s not in place now. “The problem is that we do not have a defined international system which will secure peace. It doesn’t yet exist, and we’ve got to make it. . . It’s going to take a lot of work by people to do it, because it’s not just doing it by name; the problem is to understand how that can work. This can be done. This can be done with the collaboration of some parts of the world as a whole. The overall picture is not going to be easy, but there are some connections which could be made early. But there is a lot to do to get [it] in the right way of success. “I wouldn’t depend on Trump. He’s going to do what he’s going to do, but don’t depend on him. You have to depend on the creation of a new system, not Trump’s system but a new system, a global system which will meet the requirements of the development of a true international system. And you have to organize people on that basis. You cannot just say, ‘We’re going to try to make this thing work.’ It won’t work. It won’t work. But we can start. I would say Germany,—Germany has a potential; if it wants to do so, it probably could make a good contribution. . . What Putin is doing is excellent, and it’s well integrated; China is becoming very well integrated in many respects. You’re getting development in parts of Asia. All these things are in place, but you’ve got to get the mechanism which makes it all come together in a syncretic way. “Space science is the way that people have to operate, because space science incorporates the crucial elements which are lacking from other sources. “You’ve got to get into the mind of the present population internationally and nationally; you have to get into the mind of that person who has no conception whatsoever of what that mind requires. What you can do is, you can do things which will prompt development, but its chiefly local development and regional development. We’ve got to get mechanisms of international trade and agreements thereof, and that’s what’s required urgently, right now! “Odds and ends will not do this. So, therefore, don’t try odds and ends. You’ve actually got to get into the gut of the mind of the people of different nations. I’ve had a lot of experience in this thing. It doesn’t come out because of people who are not really understanding of what this is about, but looking in the course of history, you would say that I have a very keen insight into humanity. But not all the people in it are participating. That’s the problem.”
Toon meer Toon minder