The Oxford Book of English Verse 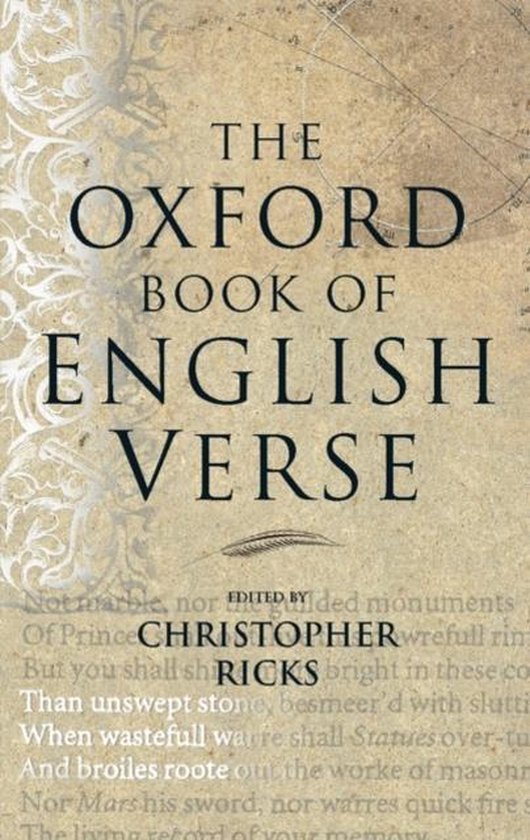 Here is a treasure-house of over seven centuries of English poetry, chosen and introduced by Christopher Ricks, whom Auden described as 'exactly the kind of critic every poet dreams of finding'. The Oxford Book of English Verse, created in 1900 by Arthur Quiller-Couch and selected anew in 1972 by Helen Gardner, has established itself as the foremost anthology of English poetry: ample in span, liberal in the kinds of poetry presented. This completely fresh selection brings in new poems and poets from all ages, and extends the range by another half-century, to include many twentieth-century figures not featured before - among them Philip Larkin and Samuel Beckett, Thom Gunn and Elaine Feinstein - right up to Ted Hughes and Seamus Heaney. Here, as before, are lyric (beginning with medieval song), satire, hymn, ode, sonnet, elegy, ballad . . . but also kinds of poetry not previously admitted: the riches of dramatic verse by Marlowe, Shakespeare, Jonson, Webster; great works of translation that are themselves true English poetry, such as Chapman's Homer (bringing in its happy wake Keats's 'On First Looking into Chapman's Homer'), Dryden's Juvenal, and many others; well-loved nursery rhymes, limericks, even clerihews. English poetry from all parts of the British Isles is firmly represented - Henryson and MacDiarmid, for example, now join Dunbar and Burns from Scotland; James Henry, Austin Clarke, and J. M. Synge now join Allingham and Yeats from Ireland; R. S. Thomas joins Dylan Thomas from Wales - and Edward Taylor and Anne Bradstreet, writing in America before its independence in the 1770s, are given a rightful and rewarding place. Some of the greatest long poems are here in their entirety - Wordsworth's 'Tintern Abbey', Coleridge's 'Rime of the Ancient Mariner', and Christina Rossetti's 'Goblin Market' - alongside some of the shortest, haikus, squibs, and epigrams. Generous and wide-ranging, mixing familiar with fresh delights, this is an anthology to move and delight all who find themselves loving English verse.
Toon meer Toon minder