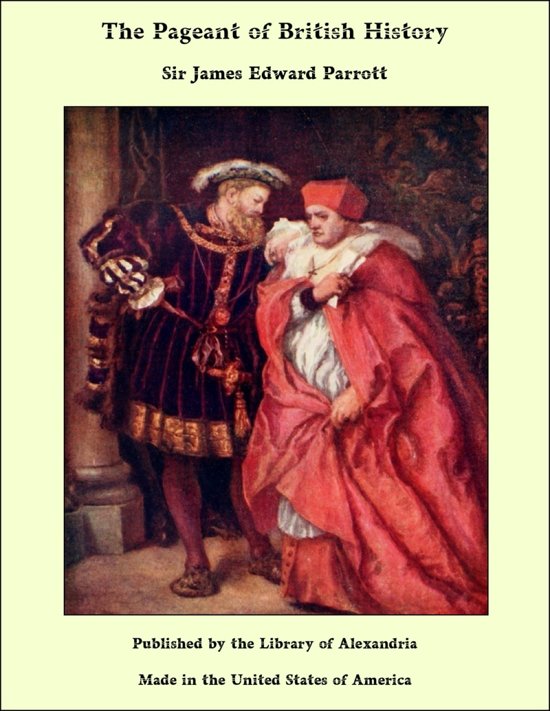 The procession advances. Who, you ask, are these swarthy, Jewish-looking men leading the way? They are Phœnicians, the first visitors from civilized shores to our island. These restless wanderers are keen traders, who have sped their barks from distant Tyre or Carthage in quest of merchandise. One of them, urging his ship northward towards this fabled happy land of the western ocean, has sighted through the clearing mists the distant line of an unknown shore. He has landed and come into touch with the natives. Spreading out his tempting treasures of purple cloth, glittering trinkets, and gleaming glass to the astonished gaze of the Britons, he has begun to barter his wares for the native products of the isle. His keen eyes soon discover that the Britons possess something far more precious than the furs which they proffer. Tin, the most precious metal of the ancient world, abounds here. The Phœnician's eyes gleam as he makes the discovery; visions of untold wealth flash before him. Tin to him is the most desirable of all metals. In due proportion it will transform soft, yielding copper into bronze, which makes the best weapons of the age. The art of tempering iron is still unknown, and swords and spear-heads of bronze still decide the battles of the ancient world. Alike in peace or war, tin is sought and prized as gold is to-day. The statues of the temples, the urns that hold the ashes of the dead, the ornaments with which men and women delight to adorn themselves, owe their beauty and value to tin. All this the Phœnician knows full well; he has discovered a Klondyke which will make him rich beyond the dreams of avarice. Again and again he visits this land of Britain, and every voyage he grows richer and richer. He takes infinite precautions lest his secret treasure-house should be discovered. He comes and goes mysteriously. Other traders, greedy for similar gains, follow in his wake and closely beset him; he even runs his ship on a foaming reef, and escapes by swimming, rather than betray the source of his wealth. But all in vain; his secret is discovered, and other barks in quick succession steer for the Tin Islands. An important trade springs up between Britain and Southern Europe. Thus, by means of those mineral treasures which have made Britain what she is, our land becomes known to the civilized world. Some three hundred years before Christ, an explorer from Marseilles pays the island a visit, and on his return writes a brief account of what he has seen. He tells us of the Kentish farms, with their granaries piled high with golden grain; and he describes the mead of honey and wheat which the islanders drink. More than two long centuries pass away before another explorer arrives to lift the veil still further. He pushes into the interior and makes acquaintance with the rustic Britons, rough and uncouth, the hunters and graziers of the island. He visits the mines of Cornwall, and tells us that the tin is found in earthy veins in the rocks; that it is extracted, ground down, smelted and purified, and exported in knuckle-shaped slabs. Packed into wagons, it is carried during ebb-tide to a neighbouring island, which may be St. Michael's Mount or the Isle of Wight, and there sold and shipped to Gaul, whence it is carried overland on the backs of pack-horses to Marseilles. Pass on, ye Phœnicians! We salute you as the fathers of that vast British commerce which has built up the mighty Empire in which we rejoice to-day. Our busy hives of industry with their great factories and roaring looms; our myriad ships that carry, over every sea to every land, the woven fabrics of our workshops, the coal of our mines, and the iron and steel of our furnaces and forges, all owe their beginnings to you who first set ajar for us the golden gates of trade.