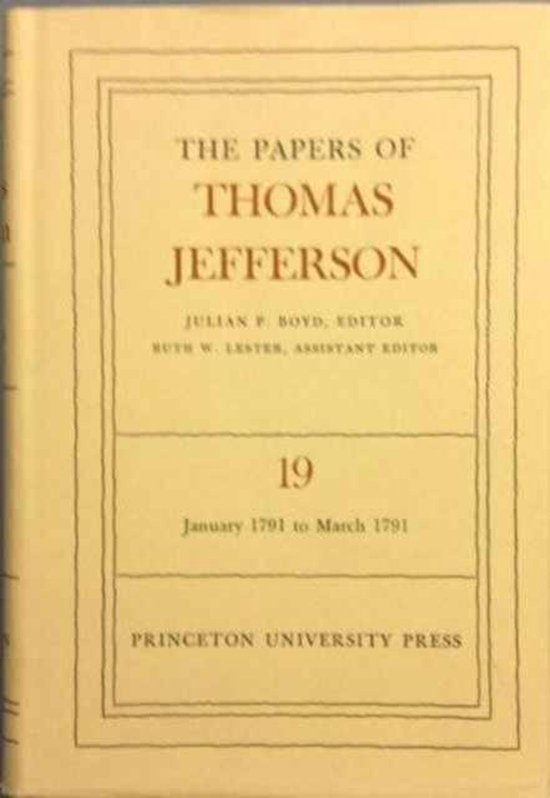 Volume 19, covering the final critical weeks of the First Congress, reveals Washington and Jefferson in the closest and most confidential relationship that existed at any time during their official careers. It opens with the proclamation announcing the exact location of the Federal District, an unexplained choice made in the utmost secrecy by the President in consultation with the Secretary of State some weeks before Washington toured the upper Potomac in an ostensible journey to inspect rival sites and to encourage competition for the location of the national capital. It includes the politically related question of the chartering of the Bank of the United States, on which Jefferson delivered his famous opinion challenging its constitutionality. But the conflict with Hamilton over the Bank, important as it was, did not bring the two men on the public stage as contestants. Instead, the first focusing of public attention on the breach in the administration occurred with the publication of Jefferson's report on the whale and cod fisheries. This widely disseminated report is here presented in a context showing that, after Hamilton declined to cooperate in reciprocating the favors France had granted to American trade, Jefferson deliberately and publicly challenged the Hamiltonian opposition. In unusually blunt language, his report called for commercial retaliation against Great Britain, thus causing a sensation both in the ...ministry. This volume shows Jefferson's concern over the growing discontent in the South and West over fiscal and other policies of the national government, his resistance to interested promotion of consular appointments in business circles, his grappling with the political and constitutional questions concerning the admission of Kentucky and Vermont, his involvement in the political consequences of the death of Franklin that affected even the proceedings of the American Philosophical Society, his cautious relationship with Tench Coxe as a source of statistical information which the Secretary of the Treasury failed to supply, and his report to Washington on a judicial appointment that brought on both embarrassment and constitutional questions. Once Congress had dispersed, Jefferson was able to turn his attention to long-neglected private concerns and to the correspondence that gave him most satisfaction, that with the family at Monticello.
Toon meer Toon minder