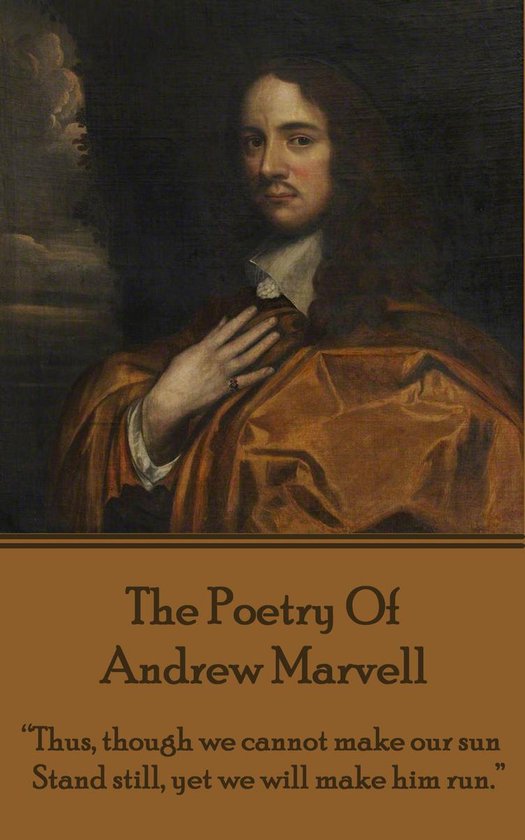 Andrew Marvell was born in 1621. The son of a clergyman, he was educated at Hull Grammar School and Trinity College, Cambridge. While at Cambridge, he converted to Catholicism for a brief period and moved to London, where he was found by his father and was persuaded to return to his studies. He left Cambridge in 1641 and spent much of the next ten years travelling abroad. In 1650 he became tutor to Lord Fairfax’s daughter Mary and lived in their house in Nun Appleton, Yorkshire. Most of his lyric poetry is thought to date from this period, including Upon Appleton House.

Marvell was an ardent Republican. He wrote several poems in honour of Cromwell, including An Horatian Ode upon Cromwell’s Return from Ireland (1650) and an elegy on his death. In 1653 he became tutor to William Dutton, Cromwell’s ward. In the same year he was recommended by Milton to be his assistant in the Latin Secretaryship to the Council of State, but was not appointed until four years later. He defended Milton after the Restoration and contributed a poem in praise of him to the second edition of Paradise Lost.

Although he is now most famous for his poetry, very few of his poems were published during his lifetime. He was MP for Hull from 1659 until his death and was renowned for his political pamphlets and satires. His most famous pamphlet, The Rehearsal Transposed, was an attack on Samuel Parker, Archdeacon of Canterbury; it was so controversial that his life was threatened, and when he died suddenly in August 1678 there were rumours that he had been poisoned – these proved to be groundless.

Elizabeth Story Donno edited numerous Elizabethan and Jacobean texts and taught at Columbia, among other places.

Jonathan Bate is King Alfred Professor of English literature and Leverhulme Research Professor at the University of Liverpool.

In 1661 Marvell was re-elected MP for Hull in the Cavalier Parliament. He eventually came to write several long and bitterly satirical verses against the corruption of the court. Although circulated in manuscript form, some finding anonymous publication in print, they were too politically sensitive and thus dangerous to be published under his name until well after his death. Marvell took up opposition to the 'court party', and satirised them anonymously. In his longest verse satire, Last Instructions to a Painter, written in 1667, Marvell responded to the political corruption that had contributed to English failures during the Second Anglo-Dutch War. From 1659 until his death in 1678, Marvell was serving as London agent for the Hull Trinity House, a shipmasters' guild. He travelled on their behalf to the Dutch Republic and Russia, Sweden, and Denmark. He died suddenly on August 16th, 1678, while in attendance at a popular meeting of his old constituents at Hull. His health had been remarkably good; and it was speculated that he was poisoned by political or clerical enemies. Marvell was buried in the church of St Giles in the Fields in central London. His monument, erected by his grateful constituency, bears the following inscription: Near this place lyeth the body of Andrew Marvell, Esq., a man so endowed by Nature, so improved by Education, Study, and Travel, so consummated by Experience, that, joining the peculiar graces of Wit and Learning, with a singular penetration and strength of judgment; and exercising all these in the whole course of his life, with an unutterable steadiness in the ways of Virtue, he became the ornament and example of his age, beloved by good men, feared by bad, admired by all, though imitated by few; and scarce paralleled by any. But a Tombstone can neither contain his character, nor is Marble necessary to transmit it to posterity; it is engraved in the minds of this generation, and will be always legible in his inimitable writings, nevertheless. He having served twenty years successfully in Parliament, and that with such Wisdom, Dexterity, and Courage, as becomes a true Patriot, the town of Kingston-upon-Hull, from whence he was deputed to that Assembly, lamenting in his death the public loss, have erected this Monument of their Grief and their Gratitude, 1688.
Toon meer Toon minder