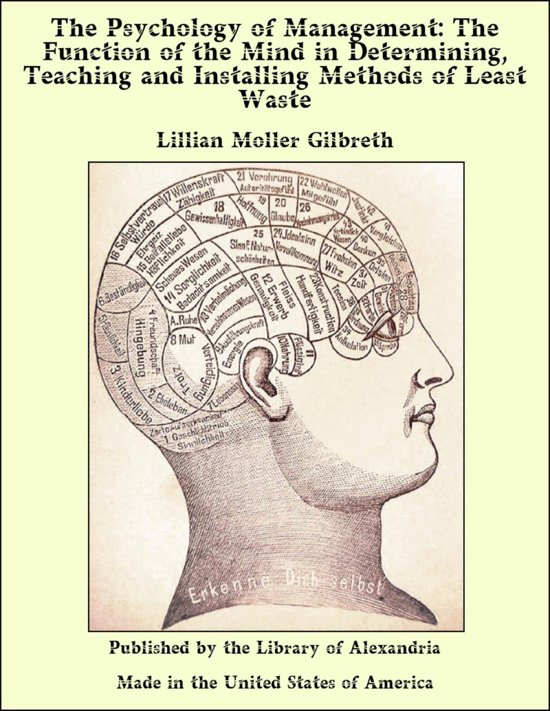 The Psychology of Management, as here used, means, — the effect of the mind that is directing work upon that work which is directed, and the effect of this undirected and directed work upon the mind of the worker. The study of management has been omitted from the student's training until comparatively recently, for a very different reason than was psychology. It was never doubted that a knowledge of management would be of great value to anyone and everyone, and many were the queer schemes for obtaining that knowledge after graduation. It was doubted that management could be studied otherwise than by observation and practice. Few teachers, if any, believed in the existence, or possibility, of a teaching science of management. Management was assumed by many to be an art, by even more it was thought to be a divinely bestowed gift or talent, rather than an acquired accomplishment. It was common belief that one could learn to manage only by going out on the work and watching other managers, or by trying to manage, and not by studying about management in a class room or in a text book; that watching a good manager might help one, but no one could hope really to succeed who had not ''the knack born in him.'' Psychology, in the popular phrase, is ''the study of the mind.'' It has for years been included in the training of all teachers, and has been one of the first steps for the student of philosophy; but it has not, usually, been included among the studies of the young scientific or engineering student, or of any students in other lines than Philosophy and Education. This, not because its value as a ''culture subject'' was not understood, but because the course of the average student is so crowded with technical preparation necessary to his life work, and because the practical value of psychology has not been recognized. It is well recognized that the teacher must understand the working of the mind in order best to impart his information in that way that will enable the student to grasp it most readily. It was not recognized that every man going out into the world needs all the knowledge that he can get as to the working of the human mind in order not only to give but to receive information with the least waste and expenditure of energy, nor was it recognized that in the industrial, as well as the academic world, almost every man is a teacher.
Toon meer Toon minder