The Reminiscences of Alexander Dyce 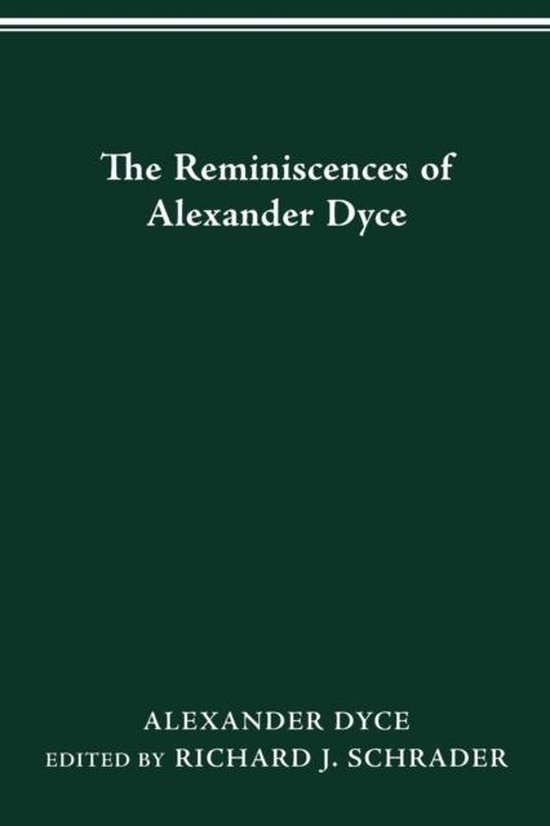 Alexander Dyce was extraordinarily gregarious, and it can be said that he crossed paths with nearly everyone of consequence in England during the first half of the nineteenth century. Any list of his friends and acquaintances that consisted of only the most famous among them would include Wordsworth, Southey, Campbell, Leigh Hunt, and the luminaries of the Rogers Circle, along with many others. Dyce wrote about all of them in his reminiscences, at which he was apparently still working when he died in May of 1869, and which are published here for the first time. He wrote, too, of the great of the theater, which was the passion of his life. He was the first modern editor of the drama of George Peele, Robert Greene, Thomas Middleton, and John Webster, and the first to edit competently Christopher Marlowe and the plays of Beaumont and Fletcher. His edition of Shakespeare was one of the nineteenth century's best, and he missed few of the major theatrical events of his time. His records of plays and performances, actors and writers, scholars and critics, are all marked by scrupulous attention to significant and telling detail. Though he sometimes reports anecdotes that have become familiar from other sources, he focuses on his personal reactions to the persons he met, the spectacles he viewed, and the parties he attended, thereby bringing to history the immediacy of personal encounter. Dyce's reminiscences are, then, a rich mine of important information on his times and those who lived them. They are, in addition-and no less importantly-a thoroughly entertaining account of a fascinating age, rendered by a man of humane wit, rare insight, and remarkable taste and sensitivity. Richard J. Schrader is assistant professor of English at Princeton University.
Toon meer Toon minder