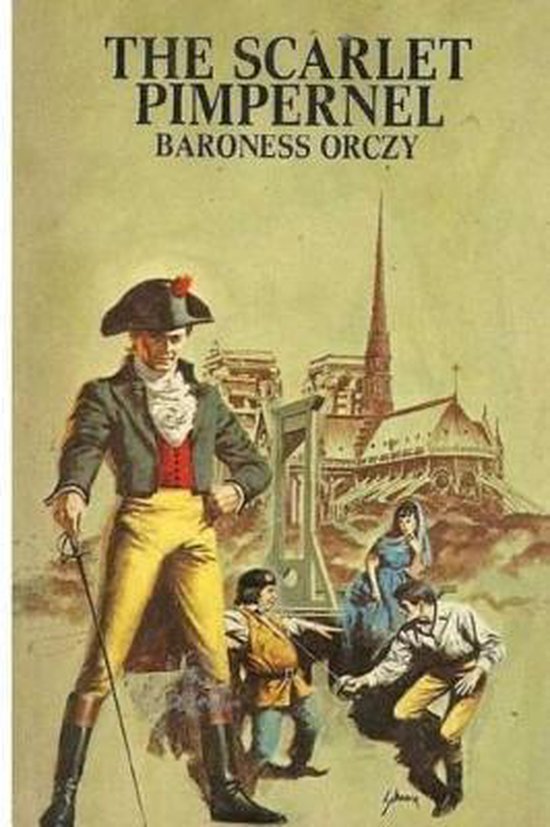 The Scarlet Pimpernel is the first novel in a series of historical fiction by Emma Orczy set during the Reign of Terror following the start of the French Revolution, first published in 1905. The novel was written after Orczy's stage play of the same title enjoyed a long run in London and popular success in earlier in 1905, after a first run in Nottingham in 1903.A surging, seething, murmuring crowd of beings that are human only in name, for to the eye and ear they seem naught but savage creatures, animated by vile passions and by the lust of vengeance and of hate. The hour, some little time before sunset, and the place, the West Barricade, at the very spot where, a decade later, a proud tyrant raised an undying monument to the nation's glory and his own vanity. During the greater part of the day the guillotine had been kept busy at its ghastly work: all that France had boasted of in the past centuries, of ancient names, and blue blood, had paid toll to her desire for liberty and for fraternity. The carnage had only ceased at this late hour of the day because there were other more interesting sights for the people to witness, a little while before the final closing of the barricades for the night. And so the crowd rushed away from the Place de la Greve and made for the various barricades in order to watch this interesting and amusing sight. It was to be seen every day, for those aristos were such fools! They were traitors to the people of course, all of them, men, women, and children, who happened to be descendants of the great men who since the Crusades had made the glory of France: her old NOBLESSE. Their ancestors had oppressed the people, had crushed them under the scarlet heels of their dainty buckled shoes, and now the people had become the rulers of France and crushed their former mastersnot beneath their heel, for they went shoeless mostly in these daysbut a more effectual weight, the knife of the guillotine. And daily, hourly, the hideous instrument of torture claimed its many victimsold men, young women, tiny children until the day when it would finally demand the head of a King and of a beautiful young Queen. But this was as it should be: were not the people now the rulers of France? Every aristocrat was a traitor, as his ancestors had been before him: for two hundred years now the people had sweated, and toiled, and starved, to keep a lustful court in lavish extravagance; now the descendants of those who had helped to make those courts brilliant had to hide for their livesto fly, if they wished to avoid the tardy vengeance of the people. And they did try to hide, and tried to fly: that was just the fun of the whole thing.The Scarlet Pimpernel is set in 1792, during the early stages of the French Revolution. Marguerite St. Just, a beautiful French actress, is the wife of wealthy English fop Sir Percy Blakeney, a baronet. Before their marriage, Marguerite took revenge upon the Marquis de St. Cyr, who had ordered her brother to be beaten for his romantic interest in the Marquis' daughter, with the unintended consequence of the Marquis and his sons being sent to the guillotine. When Percy found out, he became estranged from his wife. Marguerite, for her part, became disillusioned with Percy's shallow, dandyish lifestyle.Meanwhile, the "League of the Scarlet Pimpernel", a secret society of twenty English aristocrats, "one to command, and nineteen to obey", is engaged in rescuing their French counterparts from the daily executions (see Reign of Terror). Their leader, the mysterious Scarlet Pimpernel, takes his nickname from the drawing of a small red flower with which he signs his messages. Despite being the talk of London society, only his followers and possibly the Prince of Wales know the Pimpernel's true identity. Like many others, Marguerite is entranced by the Pimpernel's daring exploits.
Toon meer Toon minder