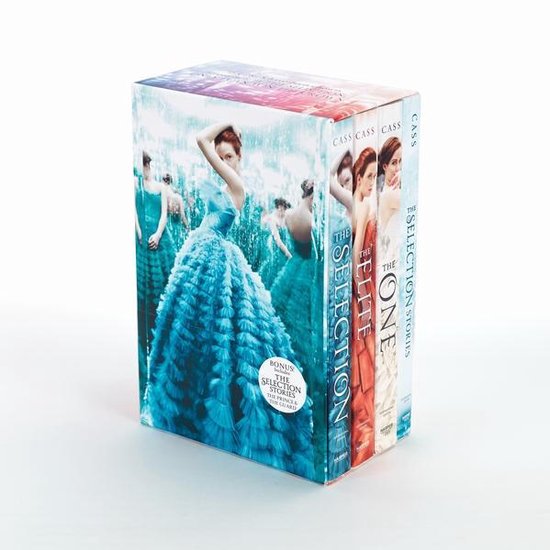 The Selection:
For thirty-five girls, the Selection is the chance of a lifetime. The opportunity to escape the life laid out for them since birth. To be swept up in a world of glittering gowns and priceless jewels. To live in a palace and compete for the heart of gorgeous Prince Maxon.

But for America Singer, being Selected is a nightmare. It means turning her back on her secret love with Aspen, who is a caste below her. Leaving her home to enter a fierce competition for a crown she doesn't want. Living in a palace that is constantly threatened by violent rebel attacks.

Then America meets Prince Maxon. Gradually, she starts to question all the plans she's made for herself—and realizes that the life she's always dreamed of may not compare to a future she never imagined.

The Elite:
The selection began with 35 girls. Now, with the group narrowed down to the Elite, the competition to win Prince Maxon's love is fiercer than ever. The closer America gets to the crown, the more she struggles to figure out where her heart truly lies. Each moment she spends with Maxon is like a fairy tale, filled with breathless, glittering romance. But whenever she sees her first love, Aspen, standing guard, she's swept up in longing for the life they'd planned to share.

America is desperate for more time. But while she's torn between her two futures, the rest of the Elite know exactly what they want—and America's chance to choose is about to slip away.

The One:
The Selection changed America Singer's life in ways she never could have imagined. Since she entered the competition to become the next princess of Illéa, America has struggled with her feelings for her first love, Aspen—and her growing attraction to Prince Maxon. Now she's made her choice.. and she's prepared to fight for the future she wants.

Find out who America will choose in The One, the enchanting, beautifully romantic third book in the Selection series!

The Prince:
Before thirty-five girls were chosen to compete in the Selection..

There was another girl in Prince Maxon’s life..

The Guard:
Raised as a Six, Aspen Leger never dreamed that he would find himself living in the palace as a member of the royal guard. An inside look at Aspen's life within the palace walls - and the truth about a guard's world that America will never know.

Extra groot lettertype
Nee
NUR code
280
Subtitel
The Selection, The Elite, The One & The Selection Stories: The Prince & The Guard

Over de serie The Selection