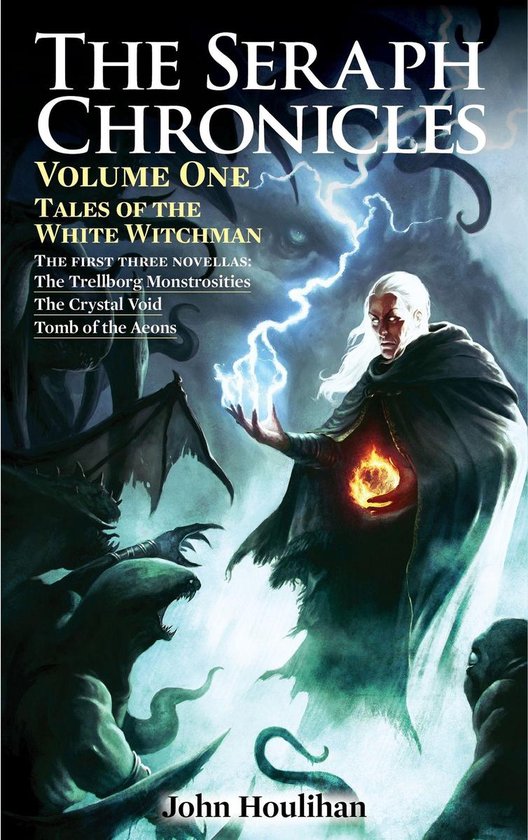 The omnibus edition of the Seraph Chronicles features the first three books in the series, The Trellborg Monstrosities, The Crystal Void, and Tomb of the Aeons in one collector's edition with a brand new introduction by the author.

It is 1943 and the war hangs on a knife edge. Set free by a leading Nazi occultist, an ancient evil stirs in the snowy fastnesses of the Norwegian border, threatening to unleash an ancient artefact which could not only alter the course of the war, but the fate of humanity itself.

Hope though endures, as a band of brave resistance fighters and a crack team of British special forces combine to plunge deep behind enemy lines to confront this ancient horror. Yet is their strange civilian adviser, the mysterious Mister Seraph, truly on the side of the angels or pursuing some dark agenda of his own? Can the fearful Trellborg terror even be defeated by mere mortal men?

The year is 1810 and as Napoleon's Grand Armee chases Wellington's expeditionary force back through Portugal to the lines of Torres Verdras, the dashing if rather dim French Hussar Gaston d'Bois is astonished to encounter the love of his life.

But the fragrant Odette is soon swept away, abducted, before d'Bois can consummate his passion by the Marquis Da Foz, a ruthless and sadistic Portuguese noblemen. The hot blooded Hussar is soon in deadly pursuit, but can d'Bois save both his true love's virtue and indeed, his own life and who, truly, is the mysterious British ally, Major Seraph, who comes to his aid?


Tomb of the Aeons

'The sands of the desert seem as unchanging as the aeons, but they constantly shift reform and remake themselves, so that one is always looking at a frozen moment in perpetual chaos.' - Commander Siegfried

It is 1941 and as Ernst Rommel, the Desert Fox, swings his great armoured right hook to send the British Eighth Army scurrying back toward Egypt, the crew of Ingrid, a mark IV panzer pursue a lone British tank into the deep wastes. But in the subsequent engagement they are ambushed and knocked out by another British tank's guns. When they awake hours later, Ingrid's commander Siegfried and his surviving crew begin the long weary trudge back to their own lines, but soon become lost in an unnatural sand storm which seems to blow up from nowhere. When they stumble upon a strange temple complex and find a unit of dead Black Sun SS, they are forced to penetrate deep into the heart of the unholy ziggurats and recover a lost artefact, the Fangs of Set, by their fellow captive, Captain Seraph. Will they defeat this charnel house's newly awoken inhabitants and can they survive the horror lurking at the very centre of this tomb of the aeons?