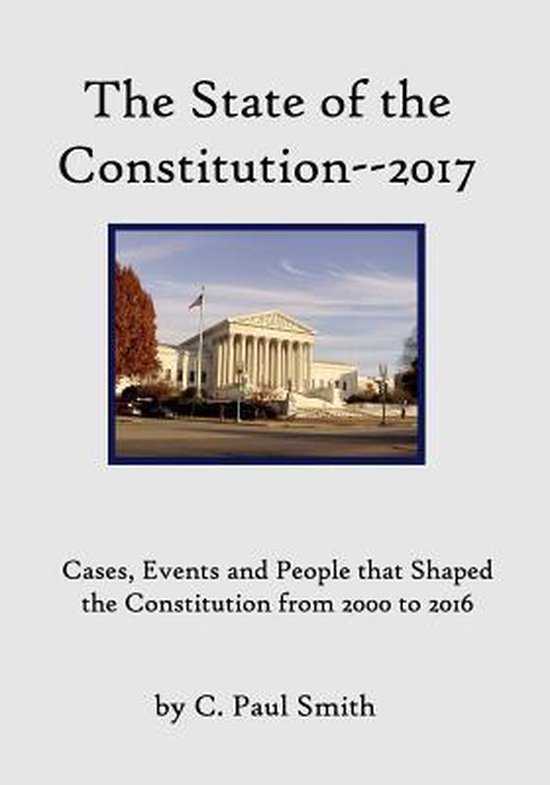 The State of the Constitution—2017 is a compilation of seventeen editions of the newsletter, Constitutional Law Updates (from 2001-2017). These writings contain lucid, concise and insightful analysis of the primary cases and events that have shaped the Constitution in the last sixteen years—from the Supreme Court case in 2000 that stopped the Florida recounts and resulted in the election of George W. Bush as President to the tumultuous and volatile campaign in 2016 that resulted in the election of Donald J. Trump as President, although he lost the popular vote by 2 million votes. This book will be a valuable resource book for elected officials, historians, Constitutional scholars and informed citizens. These writings were initially written to supplement the text, The State of the Constitution (2002), but the value of these essays, commentaries and opinion pieces warrants the publication of this book as a stand-alone volume. Those who love the Constitution will cherish this book and will find it a valuable resource in addressing many of the important moral, legal and political issues that continue to shape the political debates today in America.This is a valuable resource book for elected officials at all levels and for those intending to run for political office. This commentary and analysis helps the average citizen to understand the key issues that have been resolved for better or for worse as the Supreme Court, Congress and Presidents have made laws and established policies. For example, it is not enough to merely state an opinion that the case Citizens United was decided correctly by the Supreme Court. The section in this book that analyzes that opinion explains that the Court properly struck down that part of the Campaign Finance Reform Act that gave mainstream media corporations the right to make political commentary before primary and general election day, but which prohibited other private corporations from making such commentary during the key, pre-election days. Similarly, it is not enough to merely disagree with the Supreme Court’s ruling in Obergefell v. Hodges, which legalized same-sex marriage in every state in America. Elected leaders can be more effective and influential if they will understand how five of the Justices in the Obergefell case abandoned the Court’s time-honored standard of not establishing a new “right” or “liberty” unless such a right first has first become firmly entrenched in society’s history, practices and traditions. Additional insightful legal and/or historical discussions are included on—• the District of Columbia v. Heller case (2nd Amendment);• the Bush v. Gore case (ruling that state election processes must meet Due Process requirements);• the Massachusetts v. EPA case (declaring CO2 to be a pollutant);• the Boumediene v. Bush case (extending habeas corpus rights to enemy combatants);• the NFIB v. Sebelius case (upholding the Affordable Care Act as a “tax” that does not violate the Commerce Clause);• the Lawrence v. Texas case (creating a “liberty” to engage in homosexual sex).• several First Amendment, free speech and freedom of religion cases, including—Boy Scouts of America v. Dale;• serious flaws in two United Nations treaties—The Convention on the Rights of the Child and The Convention on Elimination of Discrimination against Women.• an excellent comparison of the platforms of the Republican and Democrat candidates for President• an analysis of the election of Donald J. Trump as President• the defection of Senator Jeffords in 2001 (when he left the Republican Party and began to caucus with the Democrats);• the expulsion of Congressman James Traficant in 2003;• the election of Arnold Schwarzenegger as Governor of California;• the aftermath of 9-11, the War in Iraq, and global terrorism;• Senate Rule XXII (the filibuster rule) and the “nuclear option” and• the Electoral College, and how it has operated in close elections.
Toon meer Toon minder