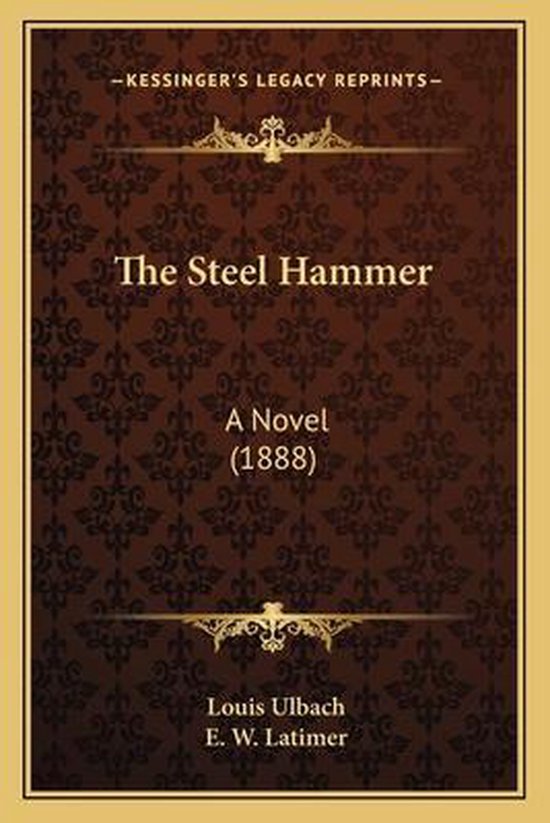 For the story is not only a splendid bit of fiction, finely conceived and vividly wrought out, but it has the rare merit of appealing to the two classes that go so far towards making up the general reading public—those who, on the one hand, are attracted by the narrative, the mere outward presentation of a series of events; and those, on the other, to whom mere externals are as nothing, whose interest is aroused only when the marks of the dissecting-knife are plainly visible, and the mysterious workings of some beating heart or throbbing brain, of which these extrinsic actions are but the expression, are set forth. It is this happy combination of objective and subjective treatment, which makes of 'The Steel Hammer' a story worthy of Gaboriau,'' while at the same time it is a study of the human conscience which might have evolved itself from the mind of Balzac.

The tale is founded upon a midnight murder in the Bois de Boulogne, but is built up out of the conflicting emotions in two human breasts, the vivisection of two women's hearts. The victim of the assassin is Pierre Mortier, who on the day of his death has fallen heir to an uncle's property. Jean Mortier, his cousin, has been cut off from the heritage without a penny. The two kinsmen are seen in the afternoon of the day when the will is read, leaving the office of the notary together, apparently in the midst of a heated dispute. In truth, the unhappy Jean is begging his cousin for a small share of the money to stave off his creditors. This Pierre refuses, and Jean threatens suicide. The two men separate, Jean, it seems, wandering desperate all night about the streets of Paris and in the solitudes of the Bois, not daring to return to his poor wife and child with the news of his disinheritance, while the puffed-up Pierre turns to the boulevards and the cafés to sup with his good fortune. In one of these cafés he drinks too much, boasts of his riches, flourishes his money, and attracts the attention of a knot of gamblers, one of whom, Gaston de Monterey, has lost heavily at cards. While one of Gaston's comrades twits him with his losses and the anger of Madame, Pierre, whose gold has made him insolent, shouts out that he could settle Monsieur's debts, only by putting his hands down into his pockets. There is further conversation; then the gamblers leave the place, and finally Pierre, who is too drunk to help himself, is assisted by a waiter out into the open air. When seen again he lies cold and dead in one of the coverts of the park, with only two or three ugly bruises upon his head to tell about his murderer. But before his death, while roaming about the city, he had suddenly bethought himself of his poor cousin, the creditors who were pressing him, and his pathetic appeal for money; and in a merciful moment, had taken out two notes, and enclosing them in an envelope on which Jean had written his address, dropped them in a letter-box.

The next day the money is found in Jean's possession, and this and the steel hammer found near it are his accusers. The world and the courts judge him guilty of his cousin's murder, and he is condemned to imprisonment. Moreover, on the same day, M. de Monterey comes home late in the morning, with money in his pockets—an unprecedented thing,—and with his leaden-headed cane, a present from his wife, broken in twain. Suspicion, however, never fastens itself upon Gaston de Monterey. Why should it, when everything is clearly proven against Jean Mortier? Only Gabrielle de Monterey, his wife, suspects the truth, while only Emilienne Mortier believes her husband innocent. And we reach the key-note of the story when we touch upon the loves these two women bear their husbands—the love of Emilienne never for a moment faltering in her conviction of Jean's innocence;....