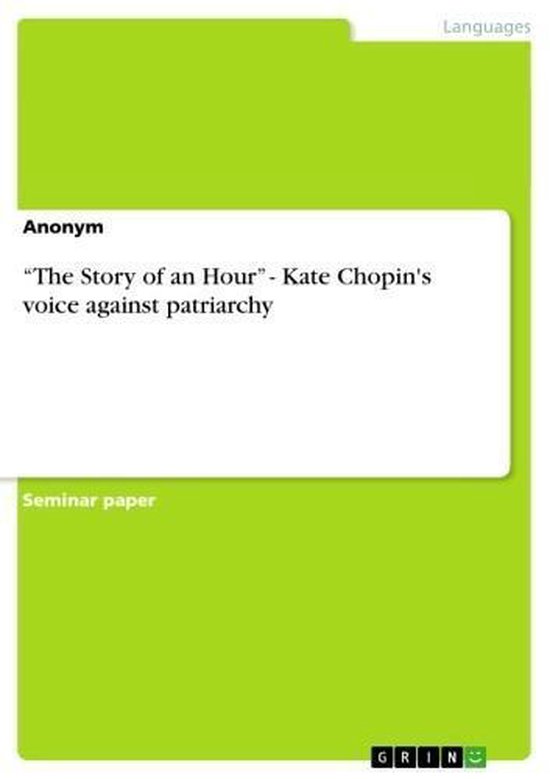 Seminar paper from the year 2004 in the subject English - Literature, Works, grade: 2,0, Johannes Gutenberg University Mainz, course: Proseminar, language: English, abstract: Kate Chopin, a female writer and essayist, lived from 1850 to 1904. From 1894 onwards, she was pushing her career to become a well accepted author. Three of her most striking stories - 'A Respectable Woman', 'The Story of an Hour', and 'Her Letters' - were about wives and their strong individualities (Toth 171). This paper is to give a feminist reading of her short story 'The Story of an Hour', written on April 19, 1894, which is in the American literary canon today. To emphasise its significance, one should mention the publication of this short story in one of the early issues of the Vogue (Toth 172). In her stories, Chopin dared to write about women, finding their personal freedom and choosing their own ways of liberation - very uncommon fiction in that period of time - or as Papke claims, the 'first modern female literary discourse in America' (4). Whereas on the one hand, the public rights of women were slowly being gained (e.g. the vote, education, rights to their children and their own property), on the other hand private needs of women were not issues so far yet. Though she never took part in any feminist movement (Papke 2), Kate Chopin can be seen as a pre-feminist writer and her work can be treated as a feminist statement. She 'however, produce[s] what one might call, for want of a better term, female moral art in works that focus relentlessly on the dialects of social relations and the position of women therein' (Papke 2). 'The Story of an Hour' illuminates how a woman, after her husband's sudden death, finds herself freed, achieves autonomy, and starts to develop self-determination - at least for the duration of one hour, as the title proclaims. It can be seen as a description of a moment that shatters social complacency and gives birth to a woman's self-desire and self-recognition. Chopin 'offer[s] readers both - criticism of what was and implicit vision of what could be, alternative worlds imagined if only through self-annihilation' (Papke 19). This short story is a great story in a small space, and with her specific use of language, Chopin brings significance to the reader with every single word. Though it is given very little information on the surface of the story, one obviously gets to know a lot about Mrs. Louise Mallard's life and with her as a representative, a lot about the experience of womanhood in Chopin's period of time. From Male-Orientation to Self-Determination: a Text-Internal Transformation