The Story of the Philippines and Our New Possessions: Including the Ladrones, Hawaii, Cuba and Porto Rico The Eldorado of the Orient EBOOK Ebooks kunnen worden gelezen op uw computer en op daarvoor geschikte e-readers. 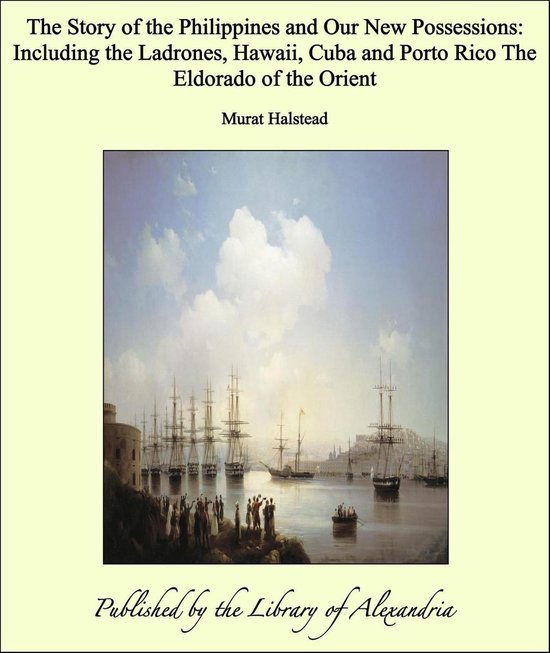 The purpose of the writer of the pages herewith presented has been to offer, in popular form, the truth touching the Philippine Islands. I made the journey from New York to Manila, to have the benefit of personal observations in preparing a history for the people. Detention at Honolulu shortened my stay in Manila, but there was much in studies at the former place that was a help at the latter. The original programme was for me to accompany General Merritt, Commander-in-Chief of the Philippine Expedition, but illness prevented its full realization, and when I arrived in Manila Bay the city had already been ''occupied and possessed'' by the American army; and the declaration of peace between the United States and Spain was made, the terms fully agreed upon with the exception of the settlement of the affairs of the Philippines. While thus prevented from witnessing stirring military movements other than those attending the transfer of our troops across the Pacific Ocean, an event in itself of the profoundest significance, the reference of the determination of the fate of the Philippine Islands to the Paris Conference, and thereby to the public opinion of our country, in extraordinary measure increased the general sensibility as to the situation of the southern Oriental seas affecting ourselves, and enhanced the value of the testimony taken on the spot of observers of experience, with the training of journalism in distinguishing the relative pertinence and potency of facts noted. Work for more than forty years, in the discussion from day to day of current history, has qualified me for the efficient exercise of my faculties in the labor undertaken. It has been my undertaking to state that which appeared to me, so that the reader may find pictures of the scenes that tell the Story that concerns the country, that the public may with enlightenment solve the naval, military, political, commercial and religious problems we are called upon by the peremptory pressure of the conditions local, and international, to solve immediately. This we have to do, facing the highest obligations of citizenship in the great American Republic, and conscious of the incomparably influential character of the principles that shall prevail through the far-reaching sweep of the policies that will be evolved. I have had such advantages in the assurance of the authenticity of the information set forth in the chapters following, that I may be permitted to name those it was my good fortune to consult with instructive results; and in making the acknowledgments due. I may be privileged to support the claim of diligence and success in the investigations made, and that I am warranted in the issue of this Story of the Philippines by the assiduous improvement of an uncommon opportunity to fit myself to serve the country. Indebtedness for kind consideration in this work is gratefully acknowledged to Major-General Merritt, commanding the Philippine Expedition; Major-General Otis, who succeeds to the duties of military and civil administration in the conquered capital of the islands; Admiral George Dewey, who improved, with statesmanship, his unparalleled victory in the first week of the war with Spain, and raised the immense questions before us; General F.V. Greene, the historian of the Russo-Turkish war, called by the President to Washington, and for whose contributions to the public intelligence he receives the hearty approval and confidence of the people; Major Bell, the vigilant and efficient head of the Bureau of Information at the headquarters of the American occupation in the Philippines; General Aguinaldo, the leader of the insurgents of his race in Luzon, and His Grace the Archbishop of Manila, who gave me a message for the United States, expressing his appreciation of the excellence of the behavior of the American army in the enforcement of order, giving peace of mind to the residents in the distracted city of all persuasions and conditions, and of the service that was done civilization in the prevention, by our arms, of threatened barbarities that had caused sore apprehension; and, I may add, the Commissioner of the Organized People of the Philippines, dispatched to Washington accompanying General Greene; and of the citizens of Manila of high character, and conductors of business enterprises with plants in the community whose destiny is in the hands of strangers. These gentlemen I may not name, for there are uncertainties that demand of them and command me to respect the prudence of their inconspicuity. This volume seems to me to be justified, and I have no further claim to offer that it is meritorious than that it is faithful to facts and true to the country in advocacy of the continued expansion of the Republic, whose field is the world. Steamship China, Pacific Ocean, September 20, 1898