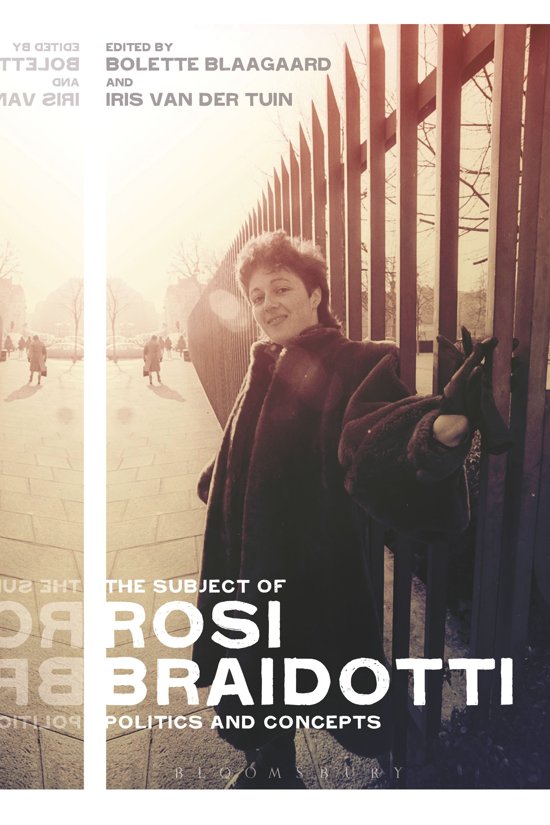 The Subject of Rosi Braidotti: Politics and Concepts brings into focus the diverse influence of the work of Rosi Braidotti on academic fields in the humanities and the social sciences such as the study and scholarship in - among others - feminist theory, political theory, continental philosophy, philosophy of science and technology, cultural studies, ethnicity and race studies.


Inspired by Braidotti's philosophy of nomadic relations of embodied thought, the volume is a mapping exercise of productive engagements and instructive interactions by a variety of international, outstanding and world-renowned scholars with texts and concepts developed by Braidotti throughout her immense body of work.


In Braidotti's work, traversing themes of engagements emerge of politics and philosophy across generations and continents. Therefore, the edited volume invites prominent scholars at different stages of their careers and from around the world to engage with Braidotti's work in terms of concepts and/or political practice.

Where on our bookshelves are Rosi Braidotti's works - Spinoza, French philosophy, feminism or in a category of their own? For those of us who have followed Rosi's nomadic pathway from analytic philosophy through currents of feminism to post-humanism, this book reminds us not just of her passionate engagement with ideas but also of the impact of her personality. The sheer breadth of her scholarship and her sympathies is mediated by her ability to inform and inspire. The essays here range over her interests and draw us in yet again to the debates close to her heart. -- Professor Christina Slade, Vice-Chancellor, Bath Spa University, UK Jump, stitch, dance, embrace, repel, think, listen, play, sculpt, write, laugh, repair, resist, read and read again, talk, yearn, leap, build, compose and decompose-all of these only hint at the transformational materialist feminist practice offered to us by and with Rosi Braidotti. Her experiential nomadic ethics position us to move with, through, and for worlds that might yet be less lethal, richer, more attuned to the affectivities of fleshy difference of situated human and more-than-human subjects. The Subject of Rosi Braidotti draws me into its tissues with the same kind of verve that Braidotti herself exemplifies in her performances, writings, activisms, and bodily vitalities. Braidotti reconfigures what and whom she touches; she is a practitioner of feminist transpositions, metamorphoses, and transductions. I know because she has transformed me again and again. The many essays in this book pulsate with the energies-conceptual, political, and affectional-that Braidotti gives us. -- Donna Haraway, Distinguished Professor Emerita, History of Consciousness Department, University of California at Santa Cruz, USA Rosi Braidotti has been a dynamic presence on the global philosophical stage for over three decades. The extent of her work and influence is reflected in this fine collection of essays by an international array of philosophers, historians, humanities and social science scholars, gender and feminist theorists and activists who have followed her critical and creative engagement with the question of the subject and who in these pages collectively engage the process of becoming-subject that is Rosi Braidotti. -- Alan D. Schrift, F. Wendell Miller Professor of Philosophy, Grinnell College, USA As a writer and a person, Rosi Braidotti encountered some of the most significant intellectual forces of the late twentieth century, including feminism, poststructuralism and posthumanist thought. These encounters were always transformative in both directions, nowhere more so than in her engagements with Deleuze's philosophy. The gust of wind that I first encountered in Paris in 1977 became a whirlwind that swept new ideas and activism across the academic landscape and continues to do so. This volume is a fitting tribute to an extraordinary life and work still underway. * Scientia Professor Paul Patton, University of New South Wales *
Toon meer Toon minder