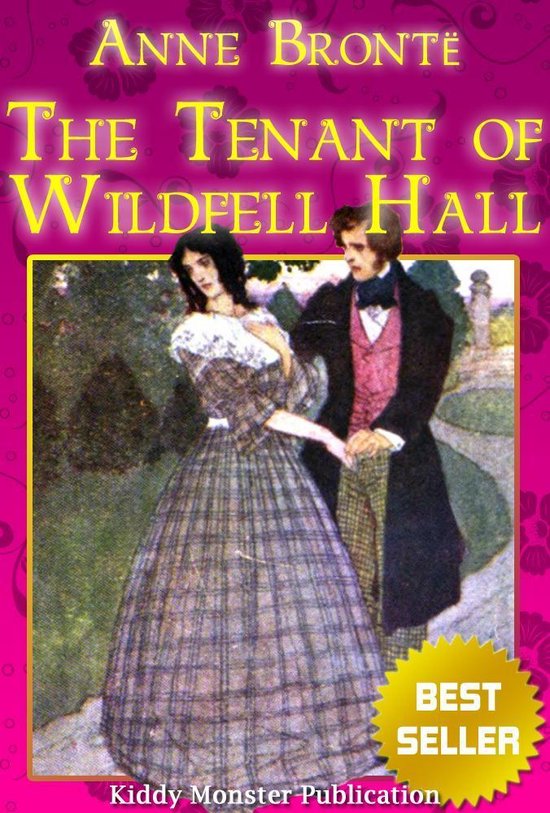 "Charlotte Brontë (/ˈbrɒnti/, commonly /-teɪ/; 21 April 1816 – 31 March 1855) was an English novelist and poet, the eldest of the three Brontë sisters who survived into adulthood and whose novels have become classics of English literature.

The Tenant of Wildfell Hall By Anne Bronte - With Illustrations, Summary and Free Audio Book Link

• FREE audio book link at the end of the book


The Tenant of Wildfell Hall


The novel is divided into three volumes.


Part One (Chapters 1 to 15): Gilbert Markham narrates how a mysterious widow, Mrs. Helen Graham arrives at Wildfell Hall, a nearby old mansion. A source of curiosity for the small community, the reticent Mrs Graham and her young son Arthur are slowly drawn into the social circles of the village. Initially, Gilbert Markham casually courts Eliza Millward, despite his mother's belief that he can do better. His interest in Eliza wanes as he comes to know Mrs. Graham. In retribution, Eliza spreads (and perhaps creates) scandalous rumours about Helen.


With gossip flying, Gilbert is led to believe that his friend, Mr. Lawrence is courting Mrs. Graham. At a chance meeting in a road, a jealous Gilbert strikes (with a whip) the mounted Lawrence, who falls from his horse. Unaware of this, Helen refuses to marry Gilbert, but gives him her diaries when he accuses her of loving Lawrence.


Part two (Chapters 16 to 44) is taken from Helen's diaries and describes her marriage to Arthur Huntingdon. The handsome, witty Huntingdon is also spoilt, selfish, and self-indulgent. Before marrying Helen, Arthur Huntingdon flirts with Annabella and uses this to manipulate Helen and convince her to marry him. Helen marries him blinded by love and resolves to reform Arthur with gentle persuasion and good example. Upon the birth of their child, Huntingdon becomes increasingly jealous of their son (also called Arthur) and his claims on Helen's attentions and affections.


Huntingdon's pack of dissolute friends frequently engage in drunken revels at the family's home, Grassdale, oppressing those of finer character. Both men and women are portrayed as degraded, with Lady Annabella Lowborough shown to be an unfaithful spouse to her melancholy but devoted husband.


Walter Hargrave, the brother of Helen's friend Milicent Hargrave, vies for Helen's affections. While not as wild as his peers, Walter is an unwelcome admirer: Helen senses his predatory nature, something revealed when they play chess. Walter tells Helen of Arthur's affair with Lady Lowborough. When his friends depart, Arthur pines openly for his paramour and derides his wife.


Arthur's corruption of their son — encouraging him to drink and swear at his tender age — is the last straw for Helen. She plans to flee to save her son, but her husband learns of her plans from her journal, and burns her artist's tools (by which she had hoped to support herself). Eventually, with help from her brother, Mr. Lawrence, Helen finds a secret refuge at Wildfell Hall.