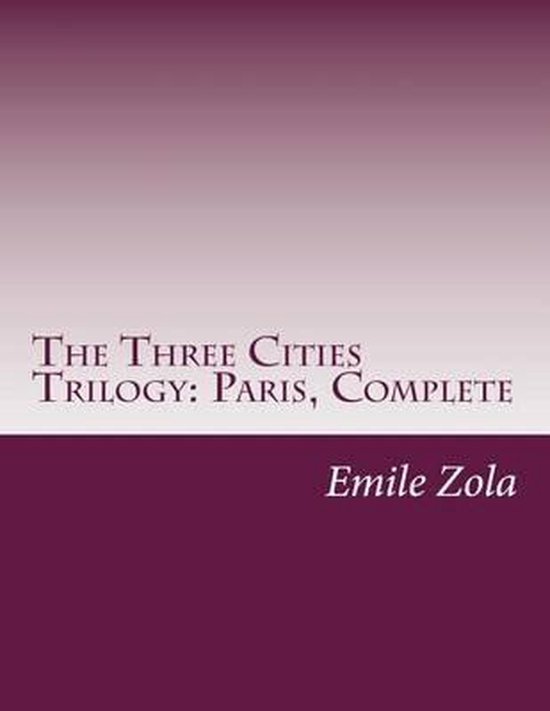 "Émile Édouard Charles Antoine Zola (/ˈzoʊlə/; French: [e.mil zo.la]; 2 April 1840 – 29 September 1902) was a French novelist, playwright, journalist, the best-known practitioner of the literary school of naturalism, and an important contributor to the development of theatrical naturalism. He was a major figure in the political liberalization of France and in the exoneration of the falsely accused and convicted army officer Alfred Dreyfus, which is encapsulated in the renowned newspaper headline J'accuse. Zola was nominated for the first and second Nobel Prize in Literature in 1901 and 1902.

WITH the present work M. Zola completes the "Trilogy of the Three Cities," which he began with "Lourdes" and continued with "Rome"; and thus the adventures and experiences of Abbe Pierre Froment, the doubting Catholic priest who failed to find faith at the miraculous grotto by the Cave, and hope amidst the crumbling theocracy of the Vatican, are here brought to what, from M. Zola's point of view, is their logical conclusion. From the first pages of "Lourdes," many readers will have divined that Abbe Froment was bound to finish as he does, for, frankly, no other finish was possible from a writer of M. Zola's opinions. Taking the Trilogy as a whole, one will find that it is essentially symbolical. Abbe Froment is Man, and his struggles are the struggles between Religion, as personified by the Roman Catholic Church, on the one hand, and Reason and Life on the other. In the Abbe's case the victory ultimately rests with the latter; and we may take it as being M. Zola's opinion that the same will eventually be the case with the great bulk of mankind. English writers are often accused of treating subjects from an insular point of view, and certainly there may be good ground for such a charge. But they are not the only writers guilty of the practice. The purview of French authors is often quite as limited: they regard French opinion as the only good opinion, and judge the rest of the world by their own standard. In the present case, if we leave the world and mankind generally on one side, and apply M. Zola's facts and theories to France alone, it will be found, I think, that he has made out a remarkably good case for himself. For it is certain that Catholicism, I may say Christianity, is fast crumbling in France. There may be revivals in certain limited circles, efforts of the greatest energy to prop up the tottering edifice by a "rallying" of believers to the democratic cause, and by a kindling of the most bitter anti-Semitic warfare; but all these revivals and efforts, although they are extremely well-advertised and create no little stir, produce very little impression on the bulk of the population. So far as France is concerned, the policy of Leo XIII. seems to have come too late. The French masses regard Catholicism or Christianity, whichever one pleases, as a religion of death,—a religion which, taking its stand on the text "There shall always be poor among you," condemns them to toil and moil in poverty and distress their whole life long, with no other consolation than the promise of happiness in heaven. And, on the other hand, they see the ministers of the Deity, "whose kingdom is not of this world," supporting the wealthy and powerful, and striving to secure wealth and power for themselves. Charity exists, of course, but the masses declare that it is no remedy; they do not ask for doles, they ask for Justice. It is largely by reason of all this that Socialism and Anarchism have made such great strides in France of recent years. Robespierre, as will be remembered, once tried to suppress Christianity altogether, and for a time certainly there was a virtually general cessation of religious observances in France. But no such Reign of Terror prevails there to-day. Men are perfectly free to believe if they are inclined to do so; and yet never were there fewer religious marriages, fewer baptisms or smaller congregations in the French churches. I refer not merely to Paris and other large cities, but to the smaller towns, and even the little hamlets of many parts. Old village priests, men practising what they teach and possessed of the most loving, benevolent hearts, have told me with tears in their eyes of the growing infidelity of their parishioners.
Toon meer Toon minder