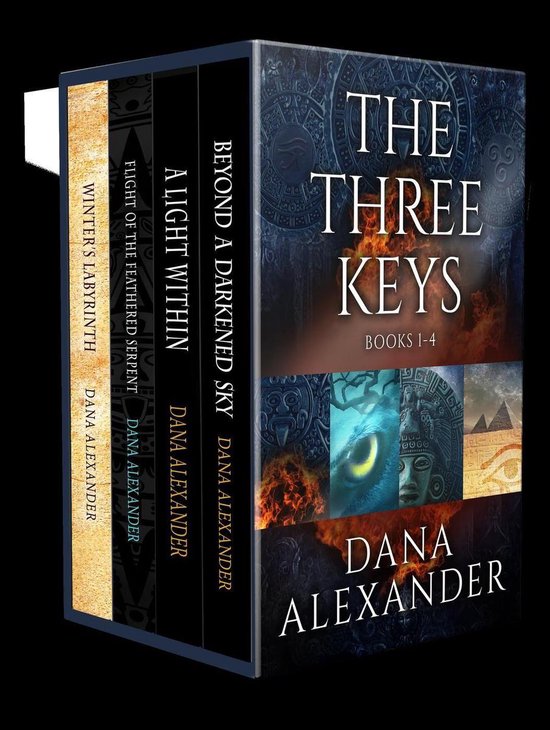 Follow unsuspecting New York psychiatrist, Sara Forrester, as she is thrown into an unthinkable quest to rescue humanity from a dark lord's demons and shadows, where real world locations house portals to mysterious realms and three ancient keys only Sara can recover. At risk are billions of lives, an immortal world, and the one connection that ever mattered—her eternal bond with the Last Great Warrior.


Beyond a Darkened Sky (Book 1)

The balance between good and evil has been shattered, opening a path for a dark lord's demons and shadows to consume the energy found in humanity. To New York psychiatrist Dr. Sara Forrester, these nightmares become more than figments of a troubled mind when the Soltari—a powerful entity governing the balance of good and evil—calls her to duty. As part of Sara's existence in this life, the Order that administers the rule of the Soltari has blocked her memory from the many past lives she's led and the power she holds for her to establish a relatively ordinary life on Earth.


The Last Great Warrior hasn't forgotten the love he's vowed to protect across time and space. He's come to Earth under the guise of a physician and colleague on an oath to the Soltari not to remind Sara of their past lives together when the mission is engaged. There is no room for distraction where unemotional decisions need to be made. If Sara fails the mission, not only will humanity be lost but also the eternal bond of two souls linked for centuries.

Sara and her team race to Scotland to find the Druid priests and the first key. But staying alive to recover the keys and save humanity is not Sara's only dilemma. She's done what she vowed never to do, let herself love another human being. But Kevin is not just any other person and she intuitively knows it. Unlike Kevin, Sara has no memory of her connection to him. The distraction could cost them everything. If Kevin breaks his oath to the Soltari by sharing with Sara his memories spanning lifetimes together, their bond could be forever severed by the very entity that brought them together.


Flight of the Feathered Serpent (Book 3)

Sara is tasked with finding the second key of life—by unlocking the riddles of Mayan myth in the shrouded depths of the Yucatan jungle. As she and her team are plunged into a history rooted in magic and mystery, they struggle to find light in the darkest corners of the unfamiliar. At risk are the billions of lives on Earth and a future Sara longs to keep with the man she bonded with before either were ever born.


But when age-old myths of a lost civilization come to life, Sara suspects the very Order she serves might have other intentions—using her to achieve a separate and malevolent purpose. She's vowed that no matter who or what might be working against her and the immortals, nothing will stand in the way of achieving her vital goal.

Consumption of humanity by an epidemic of evil shadows has shifted to its final stage. Armed with a potent angelic weapon and a conjurer of the dead, Lord Tarsamon has strengthened his position to shut down the one woman who can stop his race to plunge Earth and Ardan—home of the immortals—into a perpetual state of darkness.


Finding the last of three keys hidden in an underworld of spells is the one hope remaining and a task only Sara Forrester can fulfill. Joined by her team, Sara must brave the cryptic City of Souls to release the ancient Egyptian powers she believed to be myths.


Can Sara rescue two worlds and a future she's fought lifetimes to claim with the one man she'd risk her soul to keep before time runs out?