The Three Year's Service of the Thirty-Third Mass. Infantry Regiment, 1862-1865, and the Campaigns and Battles in Which It Took Part. 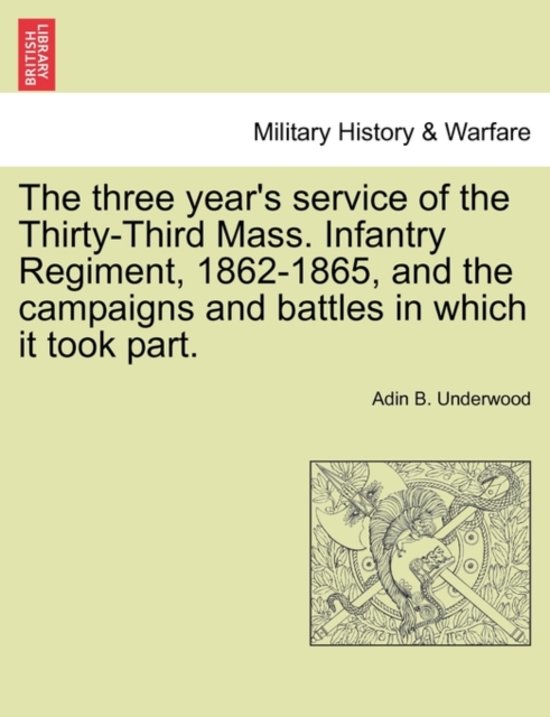 Title: The three year's service of the Thirty-Third Mass. Infantry Regiment, 1862-1865, and the campaigns and battles ... in which it took part.Publisher: British Library, Historical Print EditionsThe British Library is the national library of the United Kingdom. It is one of the world's largest research libraries holding over 150 million items in all known languages and formats: books, journals, newspapers, sound recordings, patents, maps, stamps, prints and much more. Its collections include around 14 million books, along with substantial additional collections of manuscripts and historical items dating back as far as 300 BC.The MILITARY HISTORY & WARFARE collection includes books from the British Library digitised by Microsoft. This series offers titles on warfare from ancient to modern times. It includes detailed accounts of campaigns, battles, weapons, as well as the soldiers and commanders who devised, initiated, and supported war efforts throughout history. Specific analyses discuss the impact of war on societies, cultures, economies, and changing international relationships. ++++The below data was compiled from various identification fields in the bibliographic record of this title. This data is provided as an additional tool in helping to insure edition identification: ++++ British Library Underwood, Adin B.; 1881. xiv, 299 p.; 8 . 9605.e.13.
Toon meer Toon minder