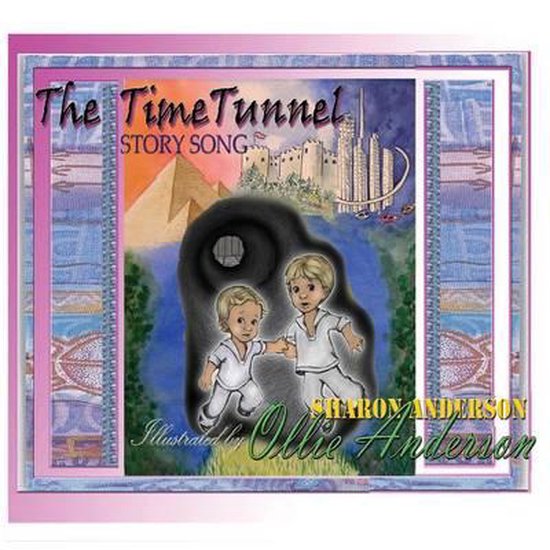 
This Time Tunnel Story is put to song, and there is a CD companion or downloadable music file that accompanies it. It is beautifully illustrated in Disney like fashion and premium color, by Sharon's sister Ollie. Adapted from The Time Tunnel book by the late Swami Kriyananda, it is a gem of the fruition of his metaphysical studies and deep insights. He artfully embroiders a fantasy story of he and his little brother finding a time tunnel and travelling through time, with the concepts of many deep truths that veritably reach out to touch the hems of the garments of ancient sages-- whose intuitions are coming of age . Some of these concepts can now be understood in our scientific realms. It is an astounding mind opener, and fun to read. Sharon Anderson along with the illustrations of sister Ollie Anderson, has put Swami's story to song in a very dynamic and engaging way. You are sure to enjoy this timeless tale that indeed innihilates time .
. Inspirations include: kriya yoga, raja yoga, krishna, arjuna, the bhagavad gita, the path, swami kriyananda, yogananda, ananda, finding happiness, between the twilight and the rim, the movie Awake, As if Smiling, Arjuna is despondent on the battlefield - Krishna spoke as if smiling, illustrations by Ollie Anderson, anchored in the divine, the alchemist, the little prince, imitation of Christ, the yoga of Jesus, Revelations of Christ, The essence of the Bhagavad Gita as proclaimed by Paramahansa Yogananda, Disney like magic, the spiritual search, The Moody Blues In search of the lost chord growing up in alberta and british Columbia, Blackie, uncle, finding a guru, love of the guru, devotion to God, meditation, union with the divine, bhakti yoga, God is for everyone, Father, J. Donald Walters, finding the perfect love of God, the Time Tunnel, the Yugas, Peter Marchand, Asha Praver, Jyotish, autobiographical spiritual adventure, practicing the presence of God, Illusions, Jonathan Livingstion Seagul, The wayshower, The Answer, The Answer Movie. Co-operating with Grace.Krishna spoke to Arjuna "As if Smiling" on the battlefield. He is on your side, Anchored in the Divine, The Search for God is beautiful, Your love for God is vibrant, With Krishna guiding Arjuna's Chariot, victory is assured. You have found this truth on the battlefield of Life. Powerful - I couldn't put the book down.Ye shall know the truth and the truth shall make you free
Toon meer Toon minder