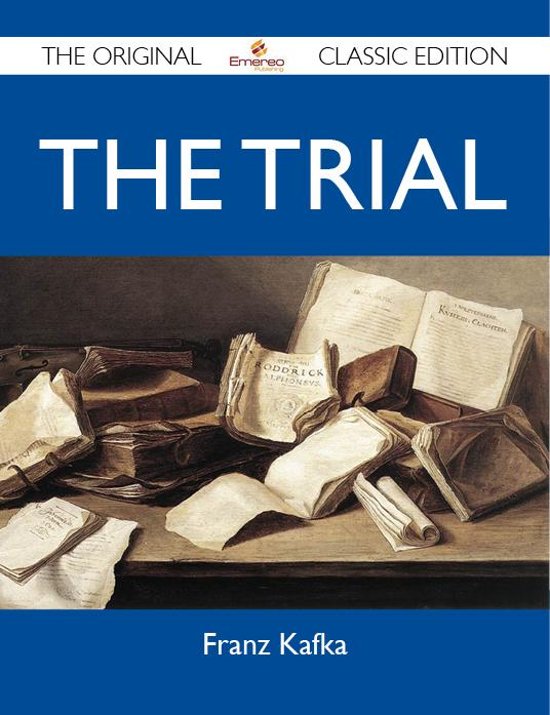 A terrifying psychological trip into the life of one Joseph K., an ordinary man who wakes up one day to find himself accused of a crime he did not commit, a crime whose nature is never revealed to him. Once arrested, he is released, but must report to court on a regular basis--an event that proves maddening, as nothing is ever resolved. As he grows more uncertain of his fate, his personal life--including work at a bank and his relations with his landlady and a young woman who lives next door--becomes increasingly unpredictable. As K. tries to gain control, he succeeds only in accelerating his own excruciating downward spiral.


This is a high quality book of the original classic edition.


He could have taken it all as a joke, a big joke set up by his colleagues at the bank for some unknown reason, or also perhaps because today was his thirtieth birthday, it was all possible of course, maybe all he had to do was laugh in the policemens face in some way and they would laugh with him, maybe they were tradesmen from the corner of the street, they looked like they might be - but he was nonetheless determined, ever since he first caught sight of the one called Franz, not to lose any slight advantage he might have had over these people.


If I had got up as soon as I was awake without letting myself get confused because Anna wasnt there, if Id got up and paid no regard to anyone who might have been in my way and come straight to you, if Id done something like having my breakfast in the kitchen as an exception, asked you to bring my clothes from my room, in short, if I had behaved sensibly then nothing more would have happened, everything that was waiting to happen would have been stifled.


There were many who thought it must be very important for K. to find Lanz the joiner and thought long about it, naming a joiner who was not called Lanz or giving a name that had some vague similarity with Lanz, or they asked neighbours or accompanied K. to a door a long way away where they thought someone of that sort might live in the back part of the building or where someone would be who could advise K. better than they could themselves.


Well, he came anyway, we were having a peaceful chat, as far as I was able when Im so weak, and although we hadnt told Leni she mustnt let anyone in as we werent expecting anyone, we still would rather have remained alone, but then along came you, Albert, thumping your fists on the door, the office director moved over into the corner pulling his table and chair with him, but now it turns out we might have, that is, if thats what you wish, we might have something to discuss with each other and it would be good if we can all come back together again. - Office director ?, he said with his head on one side, pointing with a humble smile to an armchair near the bed.


Instead of which there were just more hearings, and most of them went through the same things anyway; I had all the answers off pat like in a church service; there were messengers from the court coming to me at work several times a week, or they came to me at home or anywhere else they could find me; and that was very disturbing of course (but at least now things are better in that respect, its much less disturbing when they contact you by telephone), and rumours about my trial even started to spread among some of the people I do business with, and especially my relations, so I was being made to suffer in many different ways but there was still not the slightest sign that even the first hearing would take place soon.