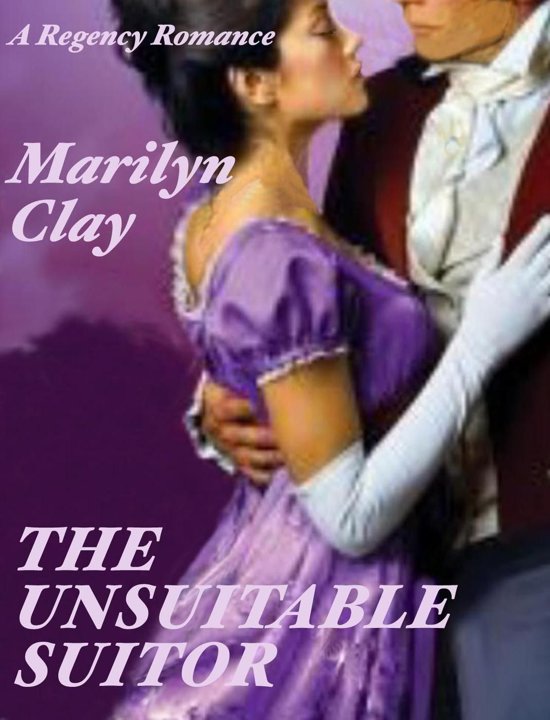 THE UNSUITABLE SUITOR a clean, sweet Regency romance by best-selling author Marilyn Clay. The story is set in London where remarkably handsome, devastatingly charming, Viscount Peterbloom was rumored to have kept as many as eight mistresses! But five years ago, the gentleman became weary of his dissolute ways and has led an exemplary life ever since. His one regret is that despite his winning way with the ladies, he never once fell in love, never once suffered the agony, or ecstasy, of a broken heart. Now, after meeting the lively Miss Miranda Frasier, Peterbloom wonders how to convince her that he is a new man?


Miranda and her sisters go to London to save their family home, only to learn the estate is now owned by the rakehell who stole a kiss from an innocent Miranda five years ago! Though she was outraged then, and still is, the memory of Lord Peterbloom's lips on hers can still make her blush. The reprobate claims to have mended his wicked ways. Miranda fervently hopes so since the handsome scoundrel holds not only the deed to her house, but the key to her heart.


''Very well done and laugh out loud amusing! Not to be missed!'' –Red River Reviews.


If you enjoy the clean, sweet Regencies of Rachel Anderson, Hanna Hamilton, Joan Smith, Charlotte Stone and Eleanor Meyers, you'll enjoy the always proper and amusing Regencies by Marilyn Clay, whose Regency Romance Novels have been in print and best-sellers for over two decades. All of Marilyn Clay's Regencies are suitable for teen readers with no strong language, graphic scenes or violence.


Look for THE WRONG MISS FAIRFAX, which debuted on a Top100 Best Selling Ebooks list! Miss Emma Fairfax and her London cousin look enough alike to be twins, although in personality they are as different as chalk and cheese. When a handsome lord meets Jemma instead of Emma, something must be done before the confused gentleman proposes to the wrong Miss Fairfax!


Marilyn Clay's historical suspense novels include DECEPTIONS: A Jamestown Novel.** To escape an arranged marriage, Catherine leaves England for Jamestown in search of her childhood sweetheart. What she finds in the New World nearly destroys her!


SECRETS AND LIES: A Jamestown Novel. When four English girls travel to the New World on a Bride Ship, they are shocked to discover that someone in Jamestown wants them all dead! Both Jamestown novels were originally published in hardcover.


BETSY ROSS: ACCIDENTAL SPY is another popular historical suspense novel by Marilyn Clay, set in Philadelphia in 1776. Quaker Betsy Ross sets out to uncover who killed her beloved husband John Ross, but is instead drawn into the dangerous and confusing underworld of spies and double agents. Available in both print and e-book.


Multi-published, best-selling author MARILYN CLAY is a highly respected historian of the English Regency. For sixteen years, she published The Regency Plume, an international newsletter containing well-researched articles covering all aspects of the 18th and early 19th centuries in English history.