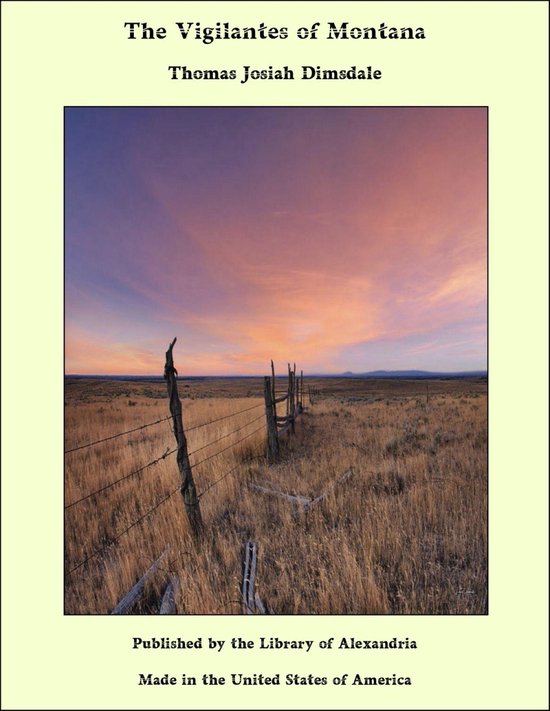 The end of all good government is the safety and happiness of the governed. It is not possible that a high state of civilization and progress can be maintained unless the tenure of life and property is secure; and it follows that the first efforts of a people in a new country for the inauguration of the reign of peace, the sure precursor of prosperity and stability, should be directed to the accomplishment of this object. In newly settled mining districts, the necessity for some effective organization of a judicial and protective character is more keenly felt than it is in other places, where the less exciting pursuits of agriculture and commerce mainly attract the attention and occupy the time of the first inhabitants. There are good reasons for this difference. The first is the entirely dissimilar character of the populations; and the second, the possession of vast sums of money by uneducated and unprincipled people, in all places where the precious metals may be obtained at the cost of the labor necessary to exhume them from the strata in which they lie concealed. In an agricultural country, the life of the pioneer settler is always one of hard labor, of considerable privation, and of more or less isolation; while the people who seek to clear the farm in the wild forest, or who break up the virgin soil of the prairies are usually of the steady and hard-working classes, needing little assistance from courts of justice to enable them to maintain rights which are seldom invaded; and whose differences, in the early days of the country are, for the most part, so slight as to be scarcely worth the cost of a litigation more complicated than a friendly and, usually, gratuitous arbitration submitted to the judgment of the most respected among the citizens. In a marked contrast to the peaceful life of the tiller of the soil, and to the placid monotony of his pursuits are the turbulent activity, the constant excitement, and the perpetual temptations to which the dweller in a mining camp is subject, both during his sojourn in the gulches, or, if he be given to prospecting, in his frequent and unpremeditated change of location, commonly called a "stampede." There can scarcely be conceived a greater or more apparent difference than exists between the staid and sedate inhabitants of rural districts, and the motley group of miners, professional men and merchants, thickly interspersed with sharpers, refugees, and a full selection from the dangerous classes that swagger, armed to the teeth, through the diggings and infest the roads leading to the newly discovered gulches, where lies the object of their worship—Gold. Fortunately the change to a better state of things is rapid, and none who now walk the streets of Virginia would believe that, within two years of this date, the great question to be decided was, which was the stronger, right or might? And here it must be stated, that the remarks which truth compels us to make, concerning the classes of individuals which furnish the law defying element of mining camps, are in no wise applicable to the majority of the people, who, while exhibiting the characteristic energy of the American race in the pursuit of wealth, yet maintain, under every disadvantage, an essential morality, which is the more creditable since it must be sincere, in order to withstand the temptations to which it is constantly exposed. "Oh, cursed thirst of gold," said the ancient, and no man has even an inkling of the truth and force of the sentiment, till he has lived where gold and silver are as much the objects of desire, and of daily and laborious exertion, as glory and promotion are to the young soldier. Were it not for the preponderance of this conservative body of citizens, every camp in remote and recently discovered mineral regions would be a field of blood; and where this is not so, the fact is proof irresistible that the good is in sufficient force to control the evil, and eventually to bring order out of chaos.