The Way to the West, and the Lives of Three Early Americans, Boone, Crockett, Carson. by Emerson Hough (a Western Clasic) 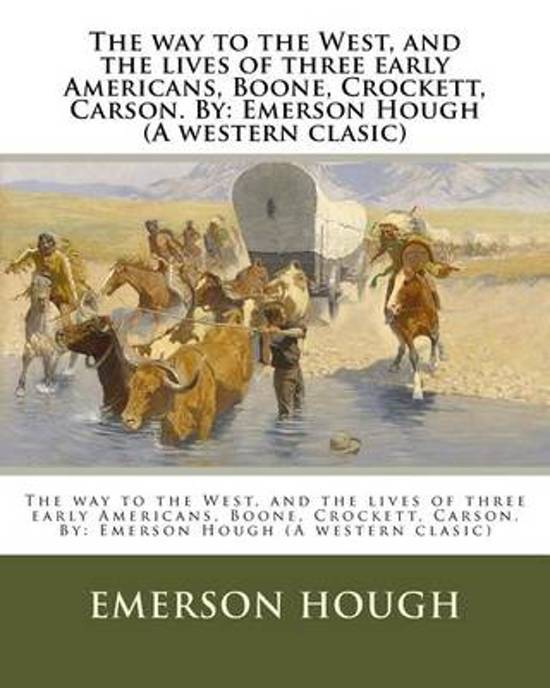 Emerson Hough (1857–1923) was an American author best known for writing western stories and historical novels.Hough was born in Newton, Iowa on June 28, 1857. He was in Newton High School's first graduating class of three in 1875. He graduated from the University of Iowa with a bachelor's degree in philosophy in 1880 and later studied law and was admitted to the bar in 1882. His first article, "Far From The Madding Crowd," was published in Forest and Stream in 1882.He moved to White Oaks, New Mexico, practiced law there, and wrote for the White Oaks newspaper Golden Era for a year and a half, returning to Iowa when his mother was ill. He later wrote Story of the Outlaw, A Study of the Western Desperado, which included profiles of Billy the Kid and Pat Garrett. Hough moved to New Mexico after Garrett shot Billy the Kid, and he became a friend of Garrett.He wrote for various newspapers in Des Moines, Iowa, Sandusky, Ohio, Chicago, Illinois, St. Louis, Missouri, and Wichita, Kansas. In 1889 he got a position as western editor of Forest and Stream, editing the "Chicago and the West" column. He was hired by George Bird Grinnell, the owner of Field and Stream, who founded the Audubon Society in 1886 which, along with Theodore Roosevelt's Boone and Crockett Club, was a leader in the conservation movement.
Toon meer Toon minder