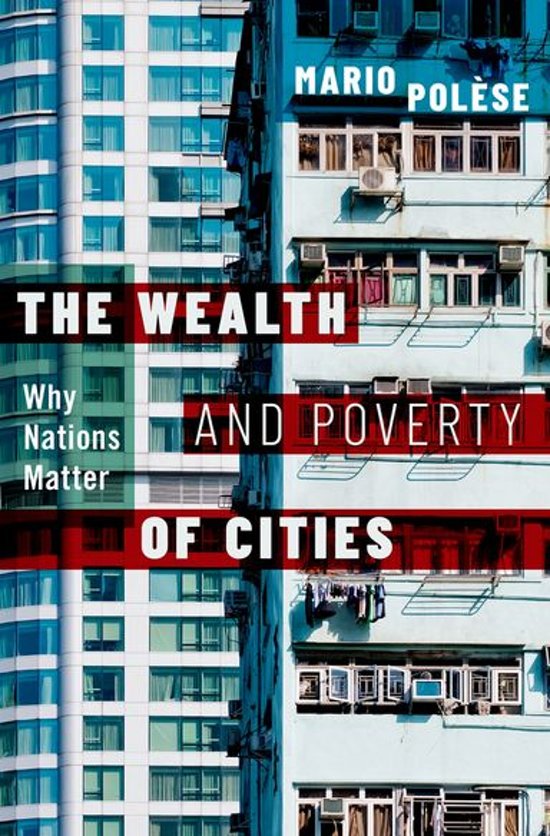 That some cities are vibrant while others are in decline is starkly apparent. In The Wealth and Poverty of Cities, Mario Polèse argues that focusing on city attributes is too narrow. Cities do not control the basic conditions that determine their success or failure as sources of economic growth and well-being. Nations matter because successful metropolitan economies do not spring forth spontaneously. The values, norms, and institutions that shape social relationships are national attributes. The preconditions for the creation of wealth-the rule of law, public education, and sound macroeconomic management among the most fundamental-are the responsibility of the state. By considering national fiscal and monetary policies and state policies governing the organization of cities, this book disentangles two processes: the mechanics of creating wealth and the mechanics of agglomeration or capturing wealth. Polèse explains the two-stage process in which the proper conditions must first be in place for the benefits of agglomeration to fully flower. Polèse interweaves evocative descriptions of various cities, contrasting cities that have been helped or hurt by local and national policies wise or ill-advised. From New York to Vienna, Buenos Aires to Port au Prince, the cities come to life. Throughout the book Polèse highlights four factors that help explain strengths and weaknesses of cities as foci of economic opportunity and social cohesion: institutions, people, centrality, and chance. The result is a nuanced and accessible introduction to the economy of cities and an original perspective on what needs to improve. Cities that have managed to produce livable urban environments for the majority of their citizens mirror the societies that spawned them. Similarly, cities that have failed are almost always signs of more deep-rooted failures. If the nation does not work, neither will its cities.

Polese's ability to distil the essence of urban and development economics into intelligible broad arguments makes for a very engaging read. The ambition is grand and Polese has the ability to present ideas to a very broad inter-disciplinary audience, and a wider non-scholarly audience too, in a beautifully engaging and clear fashion. * Dr. Simon Curtis, Senior Lecturer in International Politics, University of East Anglia * In The Wealth and Poverty of Cities, Mario Polese reminds us that cities are part of a bigger whole - the nation - that must perform well enough for the potentially productive cities to play their role. The preconditions for the creation of urban wealth, such as the rule of law, the provision of public services and sound macroeconomic policies, are the responsibility of the state. This message is central for cities to be conducive of growth in emerging economies, but also elsewhere. The reader will find an exhaustive, provocative, and jargon-free overview of what we should know in a domain that is of the utmost importance for the future of our societies. * Jacques-Francois Thisse, Catholic University of Louvain (UCL) * Cities are way more than you think. In this book, Mario Polese makes the dazzling complexity of cities vivid and highly accessible to all readers. It is a tour-de-force that is clear-eyed and easy to read, despite giving up nothing of the sophistication of frontier research on the topic. * Gilles Duranton, Wharton, University of Pennsylvania *
Toon meer Toon minder