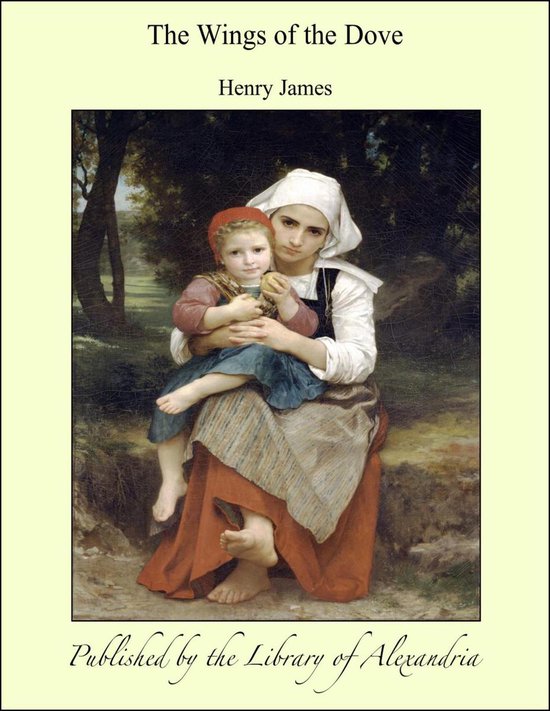 She waited, Kate Croy, for her father to come in, but he kept her unconscionably, and there were moments at which she showed herself, in the glass over the mantel, a face positively pale with the irritation that had brought her to the point of going away without sight of him. It was at this point, however, that she remained; changing her place, moving from the shabby sofa to the armchair upholstered in a glazed cloth that gave at once—she had tried it—the sense of the slippery and of the sticky. She had looked at the sallow prints on the walls and at the lonely magazine, a year old, that combined, with a small lamp in coloured glass and a knitted white centre-piece wanting in freshness, to enhance the effect of the purplish cloth on the principal table; she had above all, from time to time, taken a brief stand on the small balcony to which the pair of long windows gave access. The vulgar little street, in this view, offered scant relief from the vulgar little room; its main office was to suggest to her that the narrow black house-fronts, adjusted to a standard that would have been low even for backs, constituted quite the publicity implied by such privacies. One felt them in the room exactly as one felt the room—the hundred like it or worse—in the street. Each time she turned in again, each time, in her impatience, she gave him up, it was to sound to a deeper depth, while she tasted the faint, flat emanation of things, the failure of fortune and of honour. If she continued to wait it was really, in a manner, that she might not add the shame of fear, of individual, personal collapse, to all the other shames. To feel the street, to feel the room, to feel the table-cloth and the centre-piece and the lamp, gave her a small, salutary sense, at least, of neither shirking nor lying. This whole vision was the worst thing yet—as including, in particular, the interview for which she had prepared herself; and for what had she come but for the worst? She tried to be sad, so as not to be angry; but it made her angry that she couldn't be sad. And yet where was misery, misery too beaten for blame and chalk-marked by fate like a ''lot'' at a common auction, if not in these merciless signs of mere mean, stale feelings?