Thirty Years of My Life on Three Continents (Vol 2) 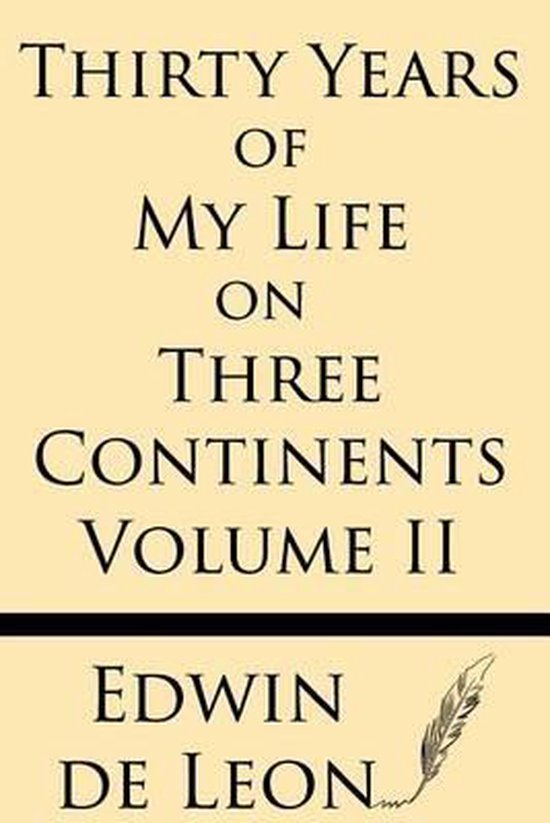 THIRTY YEARS OF MY LIFE ON THREE CONTINENTS VOL. 2
By Edwin De Leon
Excerpt from Contents
CHAPTER I
Inside Confederacy
The Rebel Capital
President Davis and Secretary Benjamin send me through Blockade to Europe as Special Envoy
My Program
Go to Wilmington
What a Confederate Cotton Blockading Port was like
Curious Contrasts
Earl of Dunmore as a Blockade Breaker
The Steamer "Theodora," "Pirate Maffitt," ordered to take me across
How we Managed it under Fire, and reached Nassau
CHAPTER II
Interview with Lord Palmerston as to Southern Recognition
His Argument and Mine
Quarrel between Man and Wife
Personal Appearance and Characteristics of Lord Palmerston, a Man who was young to the end
Anecdote of Lady Palmerston
CHAPTER III
In France
Public Opinion and the Press under the Empire
The Press System
Dardenne de la Grangerie of the Press Bureau
Due de Morny, his Characteristics
Count de Persigny
Reminiscences of, and Negotiations with, the Emperor at Vichy for Three Weeks
Garibaldi Breaks them Up
My Impressions of Louis Napoleon
Admiral Semmes' Last Night at Paris, before his Fight with the "Kerseage"
His Characteristics
CHAPTER IV
Reminiscences of Thackeray and Laurence Oliphant and of Mrs. Oliphant
Thackeray as he appeared in Private Life
The Man as distinguished from the Author
CHAPTER V
Recollections of General Gordon and of Captain Burton during several Years' Intimacy with Both
Personal Peculiarities and Anecdotes concerning the Two
Attempt of Gordon to enlist Burton's Co-operation
Why it failed
Gordon's Methods and Burton's
A Word as to Stanley's
Lady Burton as a Woman and Authoress
CHAPTER VI
At Constantinople
The City of Stamboul, and the European Colonies of Pera and Galata
Fresh Impressions on and after Landing up the Hill to Pera
What it is like
CHAPTER VII
A Friday Morning at Beschicktach
The Sultan at his Prayers
Incidents of the Ceremonial
Abdul Hamid's Conduct on such Occasions
His Personal Appearance and Peculiarities
The History of Beschicktach, the Turkish Windsor
Memories of Dead Sultans, and of one Buried Alive
Artin Pacha Dadian, Under Secretary of State
CHAPTER VIII
A Summer on the Upper Bosphorus
Up and Down in Steamer and Caique
Therapia and Buyukdere, the Summer Resorts of the Diplomatic Corps, and European Society
Admiral Hobart Pacha, Sketch of his Life and Character from Personal Observation. . .
------------------------------------------------------------------------------------------------------------------------------------------
Windham Press is committed to bringing the lost cultural heritage of ages past into the 21st century through high-quality reproductions of original, classic printed works at affordable prices.
This book has been carefully crafted to utilize the original images of antique books rather than error-prone OCR text. This also preserves the work of the original typesetters of these classics, unknown craftsmen who laid out the text, often by hand, of each and every page you will read. Their subtle art involving judgment and interaction with the text is in many ways superior and more human than the mechanical methods utilized today, and gave each book a unique, hand-crafted feel in its text that connected the reader organically to the art of bindery and book-making.
We think these benefits are worth the occasional imperfection resulting from the age of these books at the time of scanning, and their vintage feel provides a connection to the past that goes beyond the mere words of the text.
Toon meer Toon minder